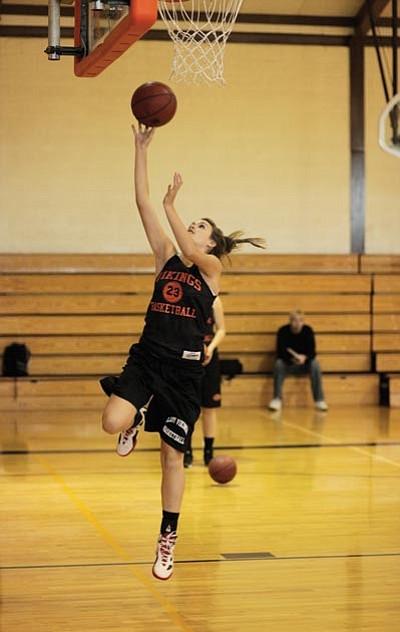 Senior Jordan Pettit drives the lane for a layup during a Nov. 6 practice. Ryan Williams/WGCN

WILLIAMS, Ariz. - The Williams High School (WHS) varsity girls basketball team is gearing up for the upcoming season, which starts in less than a week.

"I'm hoping to see some progress out of April, she's tried out the last two years but had to quit about two weeks into the season because of her struggles with asthma," said head coach Phillip Echeverria. "I hope she's able to stick with it all season this year."

This is Echeverria's fourth year as head coach. He said his team has struggled with leadership in the past but he hopes his seniors will step up and become leaders both on the court and off.

All the freshmen that played for Echeverria last year are back, making the sophomore class deep and experienced. A total of 12 freshmen are playing this year, filling out the junior varsity team.

"I'm excited about a young group like that playing together for four years and seeing what they'll be able to do by the time they're seniors," Echeverria said. "If this youth group of freshmen can stay with it and play four years of basketball together, you couldn't ask for more than that."

Echeverria said his team doesn't have much size. Being small, they'll need to play great defense and rebound well. Echeverria said he wants to pick up the tempo of the game and utilize the full court press when he feels the Lady Vikes are better than their opponent. Key to Echeverria's game plan will be pushing the ball down court to get easy buckets without having to set up a formal offense.

"Last year we finished around .500, hopefully we can finish even better this year," said the head coach. "Our goal is to make the sectional tournament and win that first game there so we can get into the state playoffs."

With an undersized team, Echeverria said he likes to run a shuffle offense where players are shuffled through to different positions to where almost anybody can play a post position. In addition, he said they would run some motion offense as well.

Defensively, Echeverria said they will play some zone, but mostly they will deploy a man-to-man defense and let the other team try to beat them.

The Lady Vikes open the season on the road in a tough matchup against Camp Verde Nov. 19.

"They'll be one of the top teams in the Division III league, it'll be a good test but it will be a learning experience for us too," Echeverria said. "We'll have to rebound well to compete."

Even though the Lady Vikes like to run and play up-tempo basketball, Echeverria said if their opponent is a lot more experienced than them they will have to slow things down and make it a half court game. Camp Verde could very well be that experienced team.

The Lady Vikes do have a scrimmage before the regular season begins, as do the boys team. WHS scrimmages Mayer this Friday at 4 p.m. at home, followed by a boys scrimmage at 6 p.m.

After their season opener on the road against Camp Verde, the Lady Vikes' first home game is Nov. 28 against Joseph City.