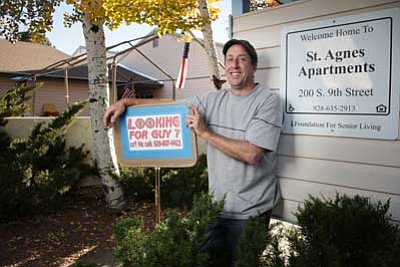 WILLIAMS, Ariz. - After two decades living and working in Williams maybe he will finally be considered a local. Guy Mikkelsen moved to Williams exactly 20 years ago this Friday to manage St. Agnes Apartments, low-income housing for qualified seniors.

About 10 years ago Mikkelsen, along with his wife Angie, took over running the Williams Food Bank. The bank now accumulates 250,000 pounds of food annually for families and individuals in need.

This Friday, on Mikkelsen's 20th anniversary working in the Williams community, the Williams-Grand Canyon Chamber of Commerce will host a mixer to fundraise for Thanksgiving boxes for those in need, a project Mikkelsen is also involved with.

"Guy is a caring, kind and funny man. And behind the funny Guy is a very determined man doing the serious work of helping people in need," said Gioia Goodrum, president and CEO of the Williams-Grand Canyon Chamber of Commerce.

Mikkelsen said he expects more than 300 families again this year.

"All the groceries for the traditional meal are included in the boxes," said Mikkelsen. "And the chamber mixer on Friday will help us fundraise for that."

Mikkelsen and his family moved from Phoenix to Williams in 1992 after he was hired as manager of St. Agnes Apartments, which is owned by the Foundation for Senior Living, a non-profit organization.

The 25-unit, five-building complex regularly receives "superior" marks from the Arizona Public Housing Authority during their annual inspections. Superior is the highest rating the Housing Authority gives out. In fact, St. Agnes has received the "superior" rating every year since 2002.

"We focused more on St. Agnes and the residents here our first 10 years, then we expanded to the whole community when we started getting involved with the Food Bank," Mikkelsen said. "The non-profit was a perfect fit here, and the company was on board too. We started out small, but then in 2008 we built the Food Bank building."

The Foundation for Senior Living agreed to place the Food Bank under its umbrella of services when Mikkelsen and his wife took it over from Millie Reed after her retirement from the Senior Center Food Bank. Mikkelsen said he even runs the same food routes as his predecessors did.

"Each Friday I go to Flagstaff and go to two Bashas' and two Safeways, and then our local Safeway gives to us six days a week," he said. "This gleaning route where Flagstaff has been helping us is over 20 years old."

According to Mikkelsen, the Food Bank is a volunteer-based community action program to which he is the liaison and his wife is the volunteer coordinator. He said many friends and family members and St. Agnes residents are volunteers, along with plenty of other people throughout the community.

"For some of the events we throw now, like the community's Easter egg hunt we've done for four years, we'll have up to 60 volunteers at once from all different groups in the community help put that together," said Mikkelsen. "Together we can then help hundreds of families, we're able to help groups like the schools and the sports teams, and different clubs and organizations with food and drinks. We do end up getting involved in a lot of stuff."

Clients use the Food Bank building, which is open every Friday from 1-4 p.m., just like a normal grocery store. Eligible families and individuals can use a shopping cart and browse through the inventory to find what they need.

The Food Bank receives produce that is "unsellable," as Mikkelsen puts it, and volunteers go through it all to find what is still edible. The produce is then cleaned, repackaged, and placed on shelves inside the Food Bank. Inedible portions or trimmings are cut and placed aside for animals, chickens and even Bearizona Wildlife Park.

"It all gets used, nothing gets wasted," Mikkelsen said. "We have volunteers in here helping out six days a week."

The Mikkelsens have three children. Their oldest daughter is a graduate of Arizona State University. Mikkelsen said he loves the small town experience and thinks Williams is a great place to raise a family.

Officials with Foundation for Senior Living have offered Mikkelsen advancement opportunities within the company but that means his family would have to move, and it doesn't sound like that is a viable option.

"Williams is our home, we're here to stay. We feel like this is our mission and our calling," he said. "Plus we have a great group of residents [at St. Agnes], we've been very privileged to have amazing people live here throughout the years."

It's safe to say that Mikkelsen and his entire family are not just locals, but valued and integral members of the community.

"I couldn't have done any of this without my wife, she's been right there with me and by my side through everything," said Mikkelsen. "I can't even put into words how important she is to me and to this community."

St. Agnes covers two and a half acres in Williams and is located at 200 South Ninth Street. The Foundation for Senior Living plans to open a 50-unit complex in Flagstaff sometime next year. St. Agnes Apartments and the Food Bank can be reached at (928) 635-2913.