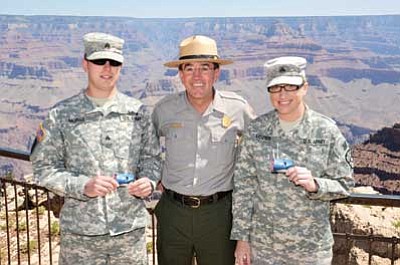 "Grand Canyon National Park is proud to recognize the brave men and women who sacrifice so much to protect our country," said Uberuaga. "The national parks are a part of the heritage of all Americans, a part of the legacy and way of life our servicemen and women protect. With these passes, we hope to increase the opportunities for military personnel to see and share that heritage with their families."

The new pass provides active duty military personnel and their dependents with free access to almost 2,000 national parks, wildlife refuges, national forests and other public lands across the country that ordinarily charge an entrance fee.

Active duty members of the U.S. Military and their dependents can pick up the new pass at Grand Canyon National Park entrance stations. Those wishing to obtain a pass must show a current, valid military identification card. More information is available at www.nps.gov/findapark/passes.htm.

This military version of the America the Beautiful National Parks and Federal Recreational Lands Pass also permits free entrance to sites managed by the U.S. Fish & Wildlife Service, the Bureau of Land Management, the Bureau of Reclamation, and the U.S. Forest Service. The pass is also available at these locations.

"Through the years, military members, especially those far from home in times of conflict, have found inspiration in America's patriotic icons and majestic landscapes, places like the Statue of Liberty and the Grand Canyon that are cared for by the National Park Service and symbolize the nation that their sacrifices protect," said National Park Service Director Jonathan B. Jarvis. "This new pass is a way to thank military members and their families for their service and their sacrifices."

For more information on the new military pass or how to acquire one, please visit the National Park Service at http://www.nps.gov/findapark/passes.htm.