Get the most out of Grand Canyon
Mather Point 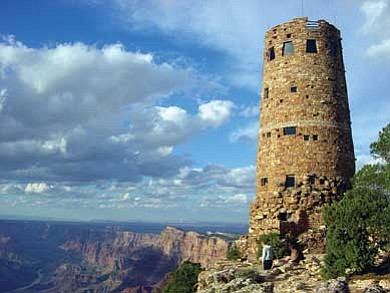 No visit to Grand Canyon National Park is complete without a stop at Mather Point. Mather Point is one of the South Rim's premier overlooks, allowing visitors an opportunity to get up close and personal with the Canyon's expansive vistas.

Picnic tables and increased viewing opportunities encourage visitors to linger and enjoy; and just east of Mather Point, a new rim-side amphitheater provides a location for informal ranger programs with the Grand Canyon as the backdrop. Accessing the viewing area has never been easier with the addition of a ramp accessible to the mobility impaired and the park's free, fully accessible shuttle bus to the new shuttle stop.

A new theater at the visitor center, located just minutes from Mather Point, shows a recently released interpretive orientation film. The visitor center plaza area also now includes features that introduce visitors to the Canyon's life zones as well as some of its flora and fauna.

The Trail of Time is an interpretive walking timeline trail along the South Rim that focuses on Grand Canyon vistas and rocks, prompting visitors to the park to ponder, explore and understand the magnitude of geologic time and the stories captured in the Canyon's rock layers and landscapes.

Every meter of the path represents one million years of Grand Canyon geology. The trail itself extends from Yavapai Observation Station to Verkamp's Visitor Center.

As walkers stroll down the meandering trail, they encounter 24 by 36 inch information panels. Thirteen of them are located along the Trail of Time. These wayside stations document events such as the Cambrian explosion, the uplift of the Colorado Plateau and other topics. Along with the waysides, actual rock samples collected from all 70-plus geologic layers of the Canyon line the trail, placed for visitors to reach out and touch.

The goal of the trail is for visitors to understand the vast geologic history of the Grand Canyon by utilizing a portion of the existing South Rim trail. Markers are located along the trail at one meter intervals, with every meter (or every step) representing one million years of the Earth's 4.6-billion-year-old history, according to park rangers. The Trail of Time is made possible by the Informal Science Education Program of the National Science Foundation, which provided $2 million for the project.

While visitors to the park will find the trail beneath their feet, online visitors will find a Web-based component of the trail as well. Called the "Virtual Trail of Time," the site is hosted by the University of New Mexico. The site can be found at > www.trailoftime.org .

Since 1993, Kolb Studio has hosted a series of changing art exhibits, each illustrating the inspirational power of Grand Canyon.

The building itself has a storied history. Natives to Philadelphia, the Kolb brothers, Ellsworth and Emery, decided to make the Grand Canyon their home in 1902, 17 years before the establishment of Grand Canyon National Park. Avid photographers and river rafters, the Kolbs were the first to document a boat trip down the Colorado River with a movie camera. Their film "Floating Down the River," shown to park visitors from 1915 until 1956, made it the longest film showing in history. The 35mm projector used is available to view in the gift shop.

The Kolb brothers were passionate about photography, and the majority of their photos were sold to visitors meandering up the Bright Angel Trail on the backs of mules. To develop their film, Emery Kolb carried the negatives in glass plates in a backpack and ran down to the only available source for fresh water, four and a half miles down and four and a half miles back up to the studio perched on the rim of the Canyon. And, Emery likely made the journey a couple times a day.

Today, Kolb Studio is open year-round. It contains an exhibit venue, bookstore, and information center operated by the Grand Canyon Association, a nonprofit organization. Proceeds from sales at the bookstore go toward the continuing restoration and care of the building. Fully remodeled in 2004 for the Kolb Studio Centennial, the bookstore now features a tribute to the Kolbs' photography of mule riders at Grand Canyon.

The tower was originally built in 1932 by architect Mary Elizabeth Jane Colter in collaboration with Hopi artisans of the day, including well-known Hopi artist Fred Kabotie. His murals are featured prominently on the second level of the tower.

Today, the 70-foot tower provides fantastic views of the Painted Desert from its upper level and contains a gift store as well.

The closing of Verkamp's Curios just a few years ago may have marked the end of an era for the century-old, family-run business. But, when the building on the Rim reopened in time for the park's 90th anniversary in February, it represented something new. Not only is it the only visitor center on the Canyon's edge, it also houses an exhibit that explains Grand Canyon as a community where people live and work.

"Nowhere in the park do we interpret the community," said Jennie Albrinck, who was one of the leading planners for the exhibit designed to fill that void. "We want to share with visitors that we are a community."

As the first visitor center on the Rim, the building is staffed with uniformed rangers daily from 8 a.m.-5 p.m. Grand Canyon Association operates a bookstore in the space as well.

When the Verkamp family didn't submit a bid in 2007 to continue with the longest-running family business in the National Park Service, Park officials decided to buy out the family's interest and convert the building, which is on the National Register of Historic Places, to interpretive use.

To learn more about how Grand Canyon really rocks, visit the museum at Yavapai Observation Station. The interactive exhibits chronicle the geological history and composition of the Canyon as well as providing a spectacular view. Admission is free.

The original museum building was dedicated in 1928.

Exhibits are devoted to geology, with the main one out beyond the windows, in the panoramic view of the Canyon.

While that main room presents the overview, both literally and academically, other exhibits look at different parts of the story in depth. A series of backlit panels use a combination of text, floor-to-ceiling visuals and interactive lessons to explain the geologic forces that shaped the Canyon and the human history that shaped what we know about it.

There is also a floor-to-ceiling model of the Canyon's rock layers and a three-dimensional relief map tabletop.

Global maps representing research into landscape evolutions were created by geologists at Northern Arizona University especially for this exhibit. To read and explore everything would take about 90 minutes though it's also designed for the visitor who will spend considerably less time.