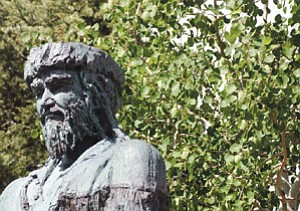 The Bill Williams Mountain Men maintain the spirit and romance of the old southwest.<br> <i>Patrick Whitehurst/WGCN </i>

The Bill Williams Mountain Men - an organization that formed in Williams in 1953 - have kept the spirit of "Old Bill" alive today. The memory of 19th century trapper William Sherley Williams - also known as "Old Bill" - is also preserved by the residents of Williams and the mountain which bears his name, located just four miles south of town.

The Bill Williams Mountain Men - comprised of businessmen, ranchers, doctors, lawyers and all other sorts - was formed as a way to keep the romance and tradition of the old southwest and early America alive in modern times.

In their earlier days, the group traveled annually to Phoenix to participate in the annual Phoenix Jaycee's Rodeo. In recent years, including this one, the trip has been make to Cave Creek, located northeast of Phoenix, where the group participates in the Cave Creek Rodeo and parade. The group has represented "Old Bill" and the city of Williams in a fashion that has made them stand out. As a result, they have been invited to many other events including all of the Fiesta Bowl Parades except one, and five different presidential inauguration parades - the most memorable of which was the inauguration of John F. Kennedy in 1961.

The Mountain Men dress and travel in the tradition of the famous fur trapper "Old Bill." From scant written records it is reported that "Old Bill" was born in Rutherford County, N.C. in 1787. He became a roving Baptist preacher and lived near or among the Osage Indians for many years.

Drifting further west, he became a member of a trapping party organized in Arizona as early as 1826. During his lifetime in great, unknown wilderness areas, he made his way as a trapper and guide, traveling at will from Oregon to old Mexico. His movements from 1825-1841 are sketchy, but it is believed he visited this particular region of Arizona frequently during those years.

Williams is said to have died at the hands of Ute Indian warriors on March 14, 1849 in Colorado, and is buried in that state. In 1980, an eight and one-half-foot, 1,000-pound bronze statue of "Old Bill" - created by local artist Bill Pettit - was unveiled at the West end of Williams.