Historic aircraft on display in Valle 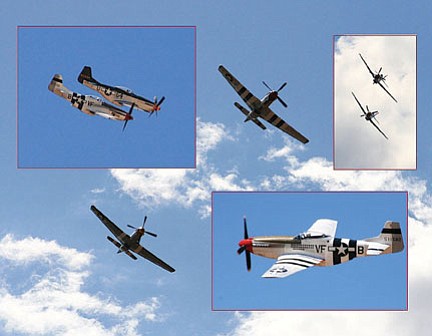 Folks of all ages will enjoy viewing the numerous planes at the museum daily.<br> <i>Submitted photo</i>

F or a fascinating look at some of history's most unique planes, visitors won't want to miss the Air Museum Planes of Fame in Valle. The museum is only a 30-minute drive from Williams.

Located at the Valle Grand Canyon Airport near the junction of highways 180 and 64, Planes of Fame is open daily from 9 a.m.-6 p.m. The Valle Visitor Center is located at the front of the museum.

The museum has a late version of the most produced fighter plane in history, the Messerschmitt BF109G-10, among its collection. New to the museum in 2008 are the Martin 404 and Western Airlines Convair 240.

Some of the other WWII fighter planes on display at the museum include T-28 Trainers, the Grumman F3F, the Vampire and the Douglas A-26 Invader. A 1929 Ford 5-AT Trimotor, which was used for flights over the Grand Canyon, is also on display.

A featured display at the museum is dedicated to women aviators from around the world. The display traces the plight of women in the history of flight, from the early pioneers to modern-day space shuttle pilots.

Planes of Fame will host its annual High Country War Birds Air Display June 23. Always held on a Saturday, the day-long event offers something for those of all ages.

The Lockheed C-21A Constellation, which was Gen. Douglas McArthur's VIP transport during the Korean War, is also available for viewing.