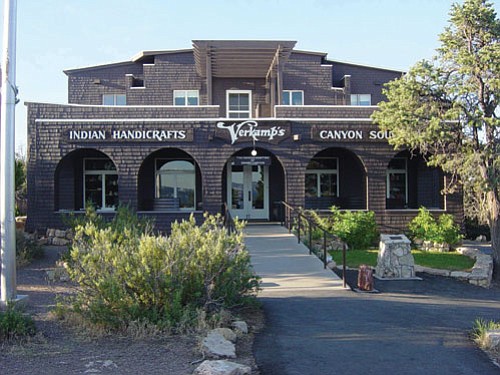 The closing of Verkamp's Curios last fall may have marked the end of an era for the century-old, family-run business. But when the building on the Rim reopened in time for the park's 90th anniversary in February, it represented something new. Not only is the only visitor center on the Canyon's edge, it's also the first exhibit that explains Grand Canyon as a community where people live and work.

"Nowhere in the park do we interpret the community," said Jennie Albrinck, who was one of the leading planners for the exhibit designed to fill that void. "We want to share with visitors that we are a community."

As the first visitor center on the Rim, the building will be staffed with uniformed rangers daily from 8 a.m.-5 p.m. Grand Canyon Association will operate a bookstore in the space as well.

When the Verkamp family didn't submit a bid in 2007 to continue with the longest-running family business in the National Park Service, Park officials decided to buy out the family's interest and convert the building, which is on the National Register of Historic Places, to interpretive use.

It seemed fitting that the space that housed one of the first and most influential families in the park would be used to tell their story and the stories of those who make this place their home.

The family has provided some artifacts. The Park Service bought the famous Louis Akin painting. The meteorite, long part of the family lore, was donated to Lowell Observatory.

Three Verkamp brothers - John, Leo and Oscar - came to Flagstaff from Cincinnati, Ohio, and joined their fortunes with five Babbitt brothers who were neighbors of theirs back in Ohio. John first attempted to set up shop on the South Rim, selling Babbitt merchandise, but abandoned that effort. In 1905, he started a store of his own in a tent on 2.5 acres, under a permit from the Forest Service manager of the Grand Canyon Forest and Game Preserve - then the managing agency.

In January of 1906, he moved to the building, the same one being used today.

The Verkamp's store was part of a wave of early 20th century development on the South Rim that included El Tovar and Hopi House, aimed at providing services for the influx of visitors the newly-arrived Santa Fe Railroad was expected to bring.

In the store's early years, John Verkamp hired managers to run things while he pursued other business interests throughout the county, including ranching, sheep-herding and prospecting.

In 1936, with his other interests lost to the Great Depression, he and his wife Catherine moved to the store, where it became their home and main livelihood.

His son, John Jr., took over in 1945, and Michael, representing the third generation to live in the store, managed it for 23 years starting in the mid-70s. Through all of those years, the Verkamp name became woven into the park's history as well.

The decision not to submit a bid was a difficult one that came down to several factors, said John's grand-daughter Susie Verkamp, who grew up in the house and operated the business with her six siblings, Jane, Steve, John G. III, Kelly, Lisa and Michael.

Among them were that the next generation of Verkamps had other interests and that contracting regulations had gotten increasingly complicated.