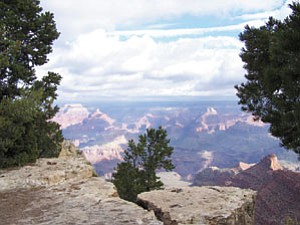 Pipe Creek Overlook is just one of the places you can find spectacular views along the Rim Trail.<br>

While going below the rim may seem like the gold standard when it comes to hiking while you're here at Grand Canyon National Park, it's not always an option for some visitors due to time constraints or physical limitations. For those seeking relatively easy day hikes overlooking the Canyon's grandeur, there's the 13-mile Rim Trail.

A paved portion of the trail runs along the Canyon's edge from Pipe Creek Overlook on Desert View Drive to Maricopa Point on Hermit Road - a distance of about five miles. For more ambitious hikers, dirt trails extend at either end - about a mile and a half east to Yaki Point, and some five miles west to Hermit's Rest.

Of the five paved miles, about three and a half, between Pipe Creek Overlook and the Bright Angel Lodge, are highly accessible to wheelchairs and strollers. While this trail is mostly level, some people might find it difficult due to the elevation.

The paved trail beyond the Bright Angel to Maricopa Point is more strenuous. It is in poor repair and climbs about 250 feet in elevation in the first mile. The undeveloped portions are rough, often running through rocky drainages or splitting off into meandering social trails that can bring hikers disconcertingly (for some) close to an unguarded edge.

Work is expected to begin this spring to repair the trail along Hermit Road and extend it, and to pave out to Yaki Point.

Yaki Point is accessible by shuttle, off Desert View Drive. Located about three quarters of a mile east of the South Kaibab Trailhead, it's one of the best places to watch the sunrise because of its location at the tip of a peninsula stretching far out into the Canyon. Also, if you visit between late August and the first week of November, there's an added treat. Each year, volunteers from Hawkwatch International spend six weeks at Yaki and further east on Lipan Point, identifying and counting the nearly 20 types of hawks and eagles that follow the Intermountain Flyway, a major migratory route, over the Canyon on their way south.

Pipe Creek Overlook is a shuttle bus stop as well as a popular viewpoint with parking. Hikers can check out a map and the view, then pick up the paved portion of the trail immediately west. Pipe Creek got its name thanks to a practical joke played by early settler Ralph Cameron in the late 1800s. As the story goes, he was hiking with friends, who were lagging behind, when he found a pipe in the stream. He quickly marked it with an 18th century date, tricking them into believing white men had been their way a century earlier.

The next viewpoint with services - Mather - is a mile and a half along a wide, smooth and gently winding trail. Across the road, hikers can take a break at Canyon View Information Plaza, which hosts rest rooms, drink machines, book store, ranger programs and shuttle bus stop.

A half mile further west is Yavapai Point where a newly opened museum tells the geological story of the Canyon. Admission is free. There are also rest rooms, a gift shop and shuttle bus stop.

Two miles along, the trail enters the South Rim historic district, which includes a series of buildings that predate the park, including the 100-year-old El Tovar Hotel and Verkamp's Curios. It also features three buildings designed by famed architect Mary Colter - Hopi House, Lookout Studio and Bright Angel Lodge. Perched on the edge at the Bright Angel Trailhead, where smooth going ends, is Kolb Studio which hosts several art exhibits each year. Also, in the winter, the Park Service offers tours of the residence that tell the story of the colorful Kolb brothers, pioneers in the Canyon's tourism history.

Continuing west along the sidewalk and down some stairs, the Rim Trail picks back up for its most strenuous portion, steeply climbing the Bright Angel fault before leveling off. There are fewer services and often fewer people out this way as well as some interesting and lesser known stories.

For instance, at Maricopa Point, a fenced area protects a humble, endangered plant known as the sentry milk vetch. Only several hundred of this species of these cliff-hugging plants exist in the world and efforts are under way to bring it back. Here, the trail starts to break up. The paved path runs along the fence and leads down to a viewpoint but to continue on your hike, watch for another paved portion picking up to the left. This part continues west but not for long. Hikers are soon confronted with a fence and behind that, a view of a headframe, the remains of the Orphan Mine, which started as a copper mine before the park was established and then operated under a grandfather clause and mined uranium from 1952-1969. The area immediately around the mine is fenced off because of the many hazards there, but a dirt trail goes around mostly hugging the fence for about a half mile.

Powell Point is named for one-armed Civil War veteran John Wesley Powell, considered the first explorer to journey down the length of the Canyon on the Colorado River in 1869. There is a monument to Powell's expedition here, with the names of three crewmembers that left the trip at Separation Canyon omitted. At this point, the paved trail ends and continues as a dirt path for five more miles out to Hermits Rest. Along the way are viewpoints like Mohave Point, where you can see the river and The Abyss, which earned its name because of its sheer cliff edge, 3,000 feet to the base of the redwall. The best vantage point is a few hundred yards west of the overlook at Pima Point, where you can not only see the Colorado River - on a quiet day you can hear it as well as it tumbles through Granite Rapids nearly a mile below. Also visible from here is Hermit Camp on the Tonto Platform.

The road ends at Hermits Rest, named for the French Canadian prospector Louis Boucher, who lived there for more than 20 years around the turn of the century. In addition to mining, he also farmed in the Canyon and raised goldfish at Dripping Springs, about six miles down the steep Hermit Trail. The Santa Fe Railroad constructed the route in 1912 and two years later added the unique limestone building designed by renowned Southwestern architect Mary Colter. Today, that building is listed on the National Register of Historic places and, as in Colter's day, provides refreshment and a gift shop for sightseers.