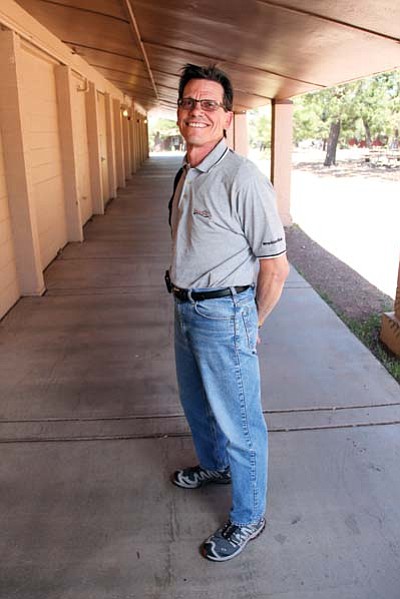 Previously at Mingus Union High School in Cottonwood for six years, Cooper said his transfer from Mingus to GCS was a result of his previous connection with current Superintendent Sharyl Allen. Cooper had worked with Allen in the past, and when she alerted him to the principal position opening at the Canyon, he was intrigued and impressed with the community's support of the school, both with time from the parents in the classrooms to the financial generosity of the local businesses for school activities and athletics.

Even though he's looking forward to retirement, the close-knit school community will be sorely missed.

"Far from being ordinary, this had to be the quirkiest group I have ever had the opportunity and pleasure, to be around and work with," Cooper said. "They are friendly, funny and committed to the school, the staff and most importantly to the students. The Canyon is unique and it takes a unique individual to want to live and teach here. I really appreciate the way the school works with the NPS and uses the expertise and knowledge of the Park Rangers."

Cooper said the excitement of the GCS boys basketball team advancement to the Great Eight this year in the state tournament, especially with a new head coach, ranks as one of the highlights of his career.

"It is always exciting to see a gym packed to capacity with energized parents, fans and alumni at our home games," Cooper, also a former basketball coach, said.

Cooper said without a doubt, the ability to view, hike or bike the Grand Canyon Park with Brad Houston and Slim Woodruff as his guides was also a bonus.

One of the main challenges that he found most rewarding during his tenure as principal was the recent evaluation of the school's Middle Years Program (MYP).

A few months ago, the Governing Board asked the administration if MYP was the right fit for the school or if they needed to move on to another curricular framework. To assess the program, a committee of teachers and faculty was formed and facilitated by Allen. According to Cooper, the group met for an "interminable number of hours" before it was decided that they needed to move away from MYP and go in another direction.

Then, the "Beyond MYP" committee was formed to determine the direction that the school would take. The committee met for 55 days and came up with a plan for grades six thourgh 12 that was accepted by the Governing Board.

Cooper said he doesn't know what his future plans will be, but one thing is for sure, they will have nothing to do with deciphering acronyms.

"I do know for sure that I will never have to fill out another ADE survey, read an ADE status update, review an ALEAT report, complete a Title One Status report, and try to figure out what all the acronyms mean: EDGAR, CSPD, IVEP, OSERS, LRE and of course my favorite FAPE, which I found out was not a reference to a Starbucks FRAPPE," Cooper said. "I truly had a wonderful 30 plus years in education and to have spent the last two in the Canyon was just icing on the cake," Cooper said.