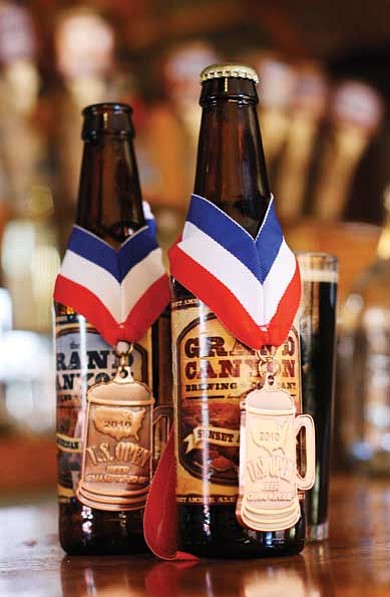 Owners of The Grand Canyon Brewery, located in the heart of downtown Williams, have carved a large niche for themselves since opening in August of 2007. While originally serving their locally-made beer in the Williams area, the brewery now distributes all over the state, including to the Grand Canyon, Flagstaff, Prescott and a number of other venues. They currently have over 600 points of distribution, including distribution aboard the Grand Canyon Railway. Their product, however, is still brewed, bottled and canned in Williams.

The brewery is operated by John and Josh Peasley along with their Head Brewer Andrew Carricato.

Offering bottles of Amber, Pale and Pilsner, the company has recently ventured into cans as well from their Williams facility. They currently offer four styles of cans, which can be found in the New Trail Mix 12-pack sampler. More product lines are in the offing as well. Tours of the brewery, as well as samples, are offered from the brewery as well as Cruiser's, at 233 W. Route 66.

"There's usually brewers there if you want to talk about brewing," John Peasley said. "We started, basically, as a brew pub trying to sell pints across the bar at Cruiser's."

Peasley said interest quickly grew about the beer. Other companies began to ask if they could offer the product.

While you're visiting northern Arizona, don't miss out on the opportunity to taste one of the region's finest brews. Be sure to ask for it at local retailers and restaurants.

More information on the Grand Canyon Brewing Company can be found online at www.grandcanyonbrewingco.com. The brewery can be reached at (928) 635-2168.