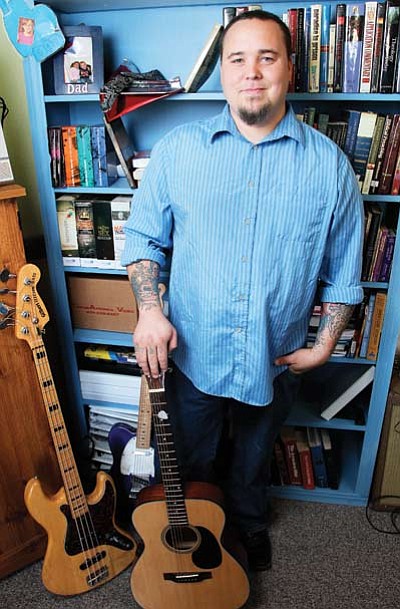 WILLIAMS, Ariz. - First Baptist Church has welcomed a new youth pastor into their congregation. Since the beginning of April, Pastor Dan Gordon has made his home in Williams with his wife and two children, following his passion to be a youth minister.

Originally from Lake Havasu City, Pastor Dan has been serving in ministry since 2008, and is wrapping up a bachelor's degree in religious studies from Liberty University. He specializes in teaching ministries, specifically youth ministry, as well as Christian counseling.

The 31-year-old said his life before joining the ministry was a "pretty interesting time."

He spent many years playing and touring in a punk band from high school until 2008. It wasn't a very positive experience, he said, with alcohol and fighting being the predominant activities in his life.

"It's kind of funny actually," he said. "That's where I learned how to speak to people, just quite a different message."

Eventually, he split with his band and found his way back to the church and youth ministry.

"So it was kind of similar to what I was doing before, but this time it was lifesaving instead of draining," Gordon said.

So far, the young pastor has enjoyed his time in Williams, quickly involving himself with other faith based organizations such as Young Life and other churches in the area, hoping to expand the already popular youth centered opportunities in Williams.

"Since it's such a small town, I really didn't know what to expect," Gordon said. "It's a lot harder to do ministry in Lake Havasu, as it's Lake Havasu and everyone knows what Lake Havasu's all about."

In other news, the First Baptist Church has started an 8 a.m. early service on Sunday.