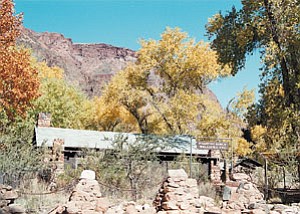 Phantom Ranch is a welcome sight to hikers arriving at the bottom of the Grand Canyon.

Responding to the growing demand for tourist services below the rim, Fred Harvey Co. opened Phantom Ranch in 1922.

Designed by famed Santa Fe Railroad architect Mary E. Jane Colter, the dining hall and surrounding cabins were built from uncut river stones, with the rest of the materials packed in by mule. The cost of construction - $22,000.

Phantom Ranch is about one vertical mile below the South Rim, at an elevation of 2,400 feet. But the trip by foot is 10 miles via the Bright Angel Trail and 7.5 miles by way of the South Kaibab Trail. Both cross the mighty Colorado River.

The ranch was named for the nearby Phantom Creek, which was approved as such on Aug. 25, 1906, by the United States Geographic Board.

That same year, a cable car was built to ferry people across the river. It was a "bully good" ride, said President Teddy Roosevelt, so much so that the first time he tried it, he asked to be taken back across so he could do it again. In 1919, the first suspension bridge was built.

Rather than pack supplies in by mule, an alfalfa field was planted to feed the livestock. Rabbit runs and a chicken house provided Sunday dinner. A Delco light plant supplied electricity. Showers and toilets were added from 1924 through 1928. The suspension bridge was replaced by the current bridge in 1928.

In the 1950s, the National Park Service began to take steps to maintain the natural environment of the Phantom area; building was kept to a minimum in keeping with a policy of preservation. What is now Phantom Ranger Station was built as housing for the United States Geological Survey in the 1960s, but other buildings were torn down. The swimming pool was filled in 1972.

Phantom Ranch features a snack and gift shop with exclusive, special edition T-shirts available only there.

Reservations should be made well in advance for both lodging and meals in the Phantom dining hall by visiting www.grandcanyonlodges.com/Phantom-Ranch-704.html or calling (888) 297-2757.

A backcountry permit is requireto stay in the nearby Bright Angel Campground. Call the backcountry office at (928) 638-7875.