Cultivating culture at the Grand Canyon 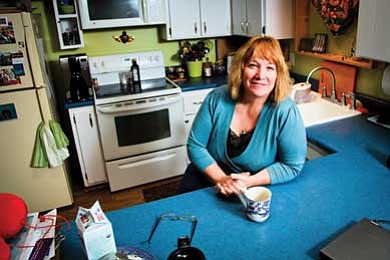 GRAND CANYON, Ariz. - It would be easy to think all the Grand Canyon has to offer is its sheer beauty and overwhelming grandeur but that's not true. While the spectacle of the natural wonder would be enough for most people, those living at the Canyon experience remarkable art and cultural events almost weekly as well. Many of these events come courtesy of the North and South Rim Artist in Residence Programs.

Rene Westbrook, the South Rim program coordinator, said the program has been around for about nine years, originally founded on the North Rim by Supervisory Ranger Ginny Albrinkt with support from the Canyon interpretation staff. Judy Bryan started the South Rim program.

"Like most national park artist in residence programs it was sort of hit and miss," Westbrook said. "If we had housing, we'd bring in an artist. They could never really establish a solid thing. It took them a couple of years."

At the outset the program was not advertised with few artist applications as a result. When Verkamp's became Park Service property around 2009, former Superintendent Steve Martin suggested the upstairs become an artist in residence space.

Westbrook stepped into the coordinator position at the same time. She said it took her months to turn the program into a year round.

"So, everybody was saying 'let's do this," Westbrook said. "What does Rocky Mountain do? What does Yosemite do?"

There wasn't much to work from.

Westbrook said she works hard to disseminate information on the program out to every single state art agency. Last year just short of 100 artists applied for the South Rim program with 70 artists vying for a spot on the North Rim.

The program is not your typical national park artist program as it attracts performance artists, writers, photographers, conceptual artists, sound artists and more.

"It's really contemporary," Westbrook said. "It's not traditional. In fact, last year I had to rewrite some of the jury criteria to encourage them to bring some painters back in - some straight landscape painters."

Westbrook said this year's panel is phenomenal - much like in past years. New this year is a park service representative. Barclay Trimble will fill the role. KNAU General Manager John Stark, Patricia Watts, curator of a cutting edge environmental art program in California, Kim Buchheit and painter and east coast freelance art consultant Kerry Bellisario round out the panel.

The jury panel selects artists for the year over the course of two days.

"It's one of the biggest projects that I do every year and it takes me a couple of months to prepare for it," Westbrook said. "It's fairly arduous. But, we do it at the Canyon and it's a fun process."

Excellence of artwork is the highest scoring component.

"That is entirely subjective," Westbrook said. "That is why I set a really smart committee."

New this year is an emerging artist category that Westbrook said is intended to give younger artists an opportunity to have their work considered.

"Their writing and descriptive stuff about their work may not be as tight as some of the mature artists but their work is really good and we want to give them a little nudge," she said. "They don't get any extra points for that but they do get extra consideration."

Westbrook said it is not uncommon for her to develop what she called "fake relationships" with some of the artists during the submittal period due to email and phone correspondence and viewing the artist's work. She if one of these artists is selected the relationship becomes even more interesting.

"By then we have exchanged cards and packets and phone calls and made plans. And, then they come out," she said. "One of my greatest joys is to pick up an artist at the Phoenix airport. I love that. Especially now that we're in Flagstaff because I don't get a lot of time with the artists. Then I get to know them well."

Getting an artist settled in at the apartment above Verkamp's Visitor Center is another treat.

"It's a really beautiful space," she said. "I actually think one of the best parts of this program is the housing because it's so inspiring by itself. I think the artists when they walk in there go 'oh, this is kind of serious.'"

Grand Canyon's artist-in-residence program is currently accepting artist application/proposals, with a deadline of April 1st for both the South and North Rim programs. For complete application criteria and information, visit http://www.nps.gov/grca/supportyourpark/air.htm.