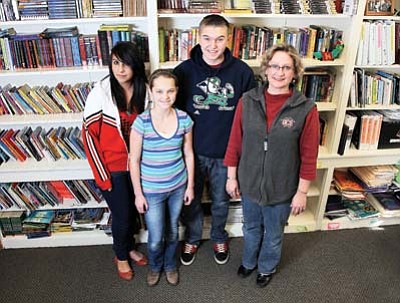 Ryan Williams/WGCN<br> From left: Grand Canyon School students Hailey Gaebel, Kylie Hartigan and Trevor Hartigan are all enthusiastically looking for ways to get their writing in print with help from their english teacher Lori Rommel.

GRAND CANYON, Ariz. - Students in Lori Rommel's English classes at Grand Canyon School spend a healthy amount of time writing. Now, some of her students are looking for ways to get published.

"They've taken it upon themselves to find ways to write and have people read their writing and become published," Rommel said.

While attending a 4-H convention, Trevor Hartigan stopped by the Arizona Elk Society's booth where he was asked if he had an upcoming hunt and whether he would be interested in submitting an account along with photos.

Seeing his writing in print has been a rewarding experience.

"It feels great," he said. "I wasn't expecting to have that. I'm going to try and do it again."

Rommel said she requires a lot of journaling in the classroom.

"As his writing has developed, the imagery, the sensations - you feel like you are there on the hunt," she said. "To see the best work of his I've seen published, I was really happy for Trevor."

Hartigan's sister, Kylie, hopes to be published in the near future as well. She said she spends much of her free time writing books. She likes to write realistic fiction about animals. If she is drawn for Elk, she hopes to submit an account of her hunt for publication as well.

Rommel said after seeing a writing contest in a scholastic journal seeking entries featuring dystopian stories around the theme 'What is your version of a world gone horribly wrong,' she knew one of her students, Hailey Gaebel, was a good fit. The prize? A trip to attend the premier of the movie adaptation of the Hunger Games by Suzanne Collins.

"I thought 'this is kind of interesting. This might fit Haley because she writes dystopian kind of stuff.' So, I presented the idea to her," Rommel said.

Rommel said the deadline seemed well off in the distance initially, but as it loomed, Gaebel struggled to work out a suitable ending to her tale. She eventually finished and dropped her work in the mail just before the deadline date. Winners were announced Monday.

Gaebel said her story centers around a world in which parents have the option of sacrificing their children at the age of 13 in the name of science. The children's bodies are then turned into robots. The story's protagonist, chosen for the robot transformation and with just a week left to live, becomes angrier and angrier with her parents.

Haley was hesitant to give away the ending.

"You should just read it," she said.

Haley said she loves writing and hopes for a career as a journalist and creative writer. She said the contest centered around dystopian themes suits her creative writing style.

"I like writing dark stuff because that is what interests me," she said. "Horror stuff."

Rommel said creative writing is an important part of her students week in the classroom from free writing in journals to more structured essays based on a prompt or thematic essays based on the more standard five paragraph format moving toward AIMS testing assessment.

"I read every single word they write," she said. "That has been a great way for me to get to know my students and see what their interests are."

Rommel said she has moved away from computers to focus more on hand written assignments for several reasons. The AIMS test is not computerized. It's still hand written. Beyond the testing environment, handwriting slows the process down.

"They have to think more about," she said. "The revision process is much more thorough because you have to sit and reread and it's not on the computer, changing a few words and printing it out again."