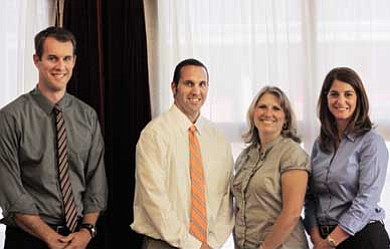 Tristan Heisley is now the Williams High School (WHS) principal, Bryan Lords has been hired as the new Williams Elementary Middle School (WEMS) principal, and Melissa Ellico takes over as Business Manager. Heisley and Ellico were promoted from within WUSD and Lords is an outside hire.

The top six candidates out of over a dozen applicants were interviewed for the principal positions. An interview committee was established which consisted of teachers, staff, parents, and community members.

"The superintendent conducts the interview and search process, and then recommends candidates to the school board," said WUSD Board President Kristi Fredrickson. "If something came up we would have had the option to not hire the person, but with the process they went through with the interview committee we felt confident as a board supporting her decision."

"She has very good leadership responsibilities, she gets really involved with the community and always knows what's going on," Fredrickson said.

Unlike past years, the superintendent and principals will not have dual responsibilities, or multiple titles.

"We wanted to have a superintendent that was only a superintendent. We wanted to have principals that were only principals," said Fredrickson. "I think the dual role type of idea can work, but right now with the people we have put in place, even with their experience, they're ultimately new to those types of positions. And I think it's important that they have the greatest opportunity for success. Adding extra roles I just don't think is a good idea, especially as a first year administrator."

Heisley, also the WHS varsity basketball coach, was promoted from his former position of teacher. Lords is originally from Idaho, has previous teaching experience, and was most recently an assistant principal in Window Rock, Ariz. Ellico was promoted from her position as Governing Board Secretary.

During the meeting, the board also discussed a special election to be held on Nov. 6 to authorize a ten percent maintenance and operation override. The board wants to maintain the current override program, which has been in effect for over ten years.

"Every five years you have to renew the override," said Fredrickson. "And it does not increase taxes at all, it simply maintains the current rate. I think that's really important for people to understand, that we're not asking for additional money but to continue with the override we currently have."

In other council news an Intergovernmental Agreement (IGA) with Coconino Community College for dual enrollment courses was approved. U.S. History was added to the dual enrollment curriculum list, which means that next year over 40 students will be receiving college credit while taking one of these designated high school classes.