The oldest Hopi show in the world returns Saturday and Sunday at Museum of Northern Arizona
Enjoy music, insight programs and food in addition to Hopi artists and presenters 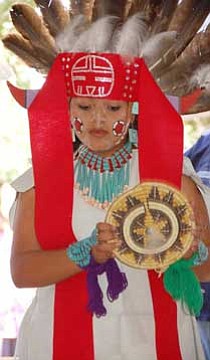 FLAGSTAFF, Ariz. - Once again the big tent in the cool pines is going up at the Museum of Northern Arizona and Hopi people are making plans to travel to Flagstaff for the 79th Annual Hopi Festival of Arts and Culture, the oldest Hopi show in the world. Starting the Fourth of July celebration early on Saturday and Sunday, there will be music, dances, insight programs, and food, bringing visitors together with Hopi artists and presenters.

"In addition to the 80 booth artists, museum staffers have made several trips to collect one-of-a-kind consigned works from individual artists across the Hopi Mesas," said Heritage Program Manager Anne Doyle. "Collecting trips have always been an important part of the Hopi festivals, allowing artists who produce only a few items per year a chance to sell their work. Hundreds of distinctive art pieces including quilts, rattles, pottery, katsina dolls, paintings, and baskets will be on display and for sale in the consignment area."

"I am also thrilled to announce, that with special funding, we have been able to increase our awards and award categories for katsina doll carvers this year," adds Doyle. "There will be a new Best of Class award for $1,500 and awards for traditional, contemporary, and sculptural katsina doll carving."

"I'm excited that along with the festival we will be presenting an exhibit of the work of two historic photographers, Kate Cory and Emry Kopta, from the MNA Archives," said Museum Director Robert Breunig.

These photographs provide compelling images of everyday life at Hopi in the "centennial era," approximately 100 years ago. Kate Cory lived on the Hopi Mesas from 1905 to 1912 and documented through photography many aspects of daily life. Emry Kopta, a sculptor, came to Hopi soon after Cory, staying at First Mesa between 1912 and 1925. He, too, took many fascinating pictures of life at Hopi. Selections from the works of both of these photographers will be displayed at the festival in honor of the Arizona Centennial.

Heritage insight presentations will include -

• "Hopi Lands, Snow Capped Peaks and Red Hill: Understanding the Hopi Legacy of Stewardship and Experience in the San Francisco Peaks Region," by Micah Loma'omvaya. A Hopi tribal member of the Bear Clan from Songoopavi Village on Second Mesa, Loma'omvaya earned a B.A. degree in anthropology from the University of Arizona in 1997 and has worked in the field of anthropology since the age of 17. He currently works as a consulting anthropologist based on the Hopi Reservation, specializing in cultural and natural resources management projects. One of his long-term goals is to establish a community-based Hopi natural and cultural resource center, to promote the preservation and teaching of Hopi land stewardship and resource use through traditional knowledge, language, and practices for Hopi and Tewa youth.

• "The Hopi Way of Life," by Hopi preservationist Donald Dawahongnewa. Dawahongnewa has dedicated himself to preserving the Hopi culture. He works in the Hopi Cultural Preservation Office and is a member of important religious societies. He says it is not always easy to follow the traditions and he insists on using the Hopi language in ceremonies. He also says that Hopi should always be balanced and that everyone should be living in harmony. That is the Hopi way.

• "Preservation of the Hopi Language," by Hopi language educator Anita Poleahla and Mesa Media. Mesa Media's mission is to revitalize the Hopi language, which encompasses the philosophy of personal and collective relationships to food, land, and water which have been maintained by Hopi people for centuries.

"The Hopi language is more than just a method of communicating on a day-to-day basis. Although Hopi ancestors left their clan markings and other symbols all over the ancient homelands during their migrations, the Hopi legends, prophecies, and the language itself have been passed down from generation to generation orally. Our language is everything. It connects us to our ancestors," said Poleahla.

• "Hopi Summer," by author Carolyn O'Bagy Davis. Davis will talk about Hopi lives during the 1920s and 30s, prior to the tremendous changes to the Hopi villages, brought about by the U.S. government, anthropologists, and tourists. These changes are viewed through years of correspondence between Wilfred and Ethel Muchvo, a Hopi family on First Mesa and visitors to the Hopi Reservation, Maud and Carey Melville from Worcester, MA. Ethel Muchvo wrote of starvation, daily life, illness and death, and the constant pressure from missionaries and government to abandon traditional Hopi ways. This is a poignant and memorable story.

Under the Big Tent

On June 30-July 1, Casper and the 602 Band will perform their high energy, Jamaican-inspired reggae combined with Native roots. Casper Loma-da-wa's lyrics are filled with hope and power, telling stories of contemporary reservation life.

"Reggae is the music of a struggling people - that's what Jamaican music is. We, as Native people, have been struggling all these years," said Loma-da-wa. The band has opened for reggae greats such as the Wailers, Culture, and Burning Spear.

The Nuvatukya'ovi Sinom Dance Group will perform the Buffalo Dance, which serves as a reminder that buffalo, antelope, and deer used to roam in northern Arizona. Usually performed in the winter, this dance encourages snow, good hunting, abundance of wildlife, and survival. The dancers will also perform the Koonina or Supai Dance, celebrating the Havasupai people, the Palhikwmana or Water Maiden Dance, and the Koshari or clown dance to unite people and make them happy. All of the dance troup's regalia - clothing, weaving, jewelry, and tabletas or headdresses - is designed and handmade by the dancers.

KUYI, 88.1FM Hopi Radio from Hotvela (Hotevilla) on the mesa tops of northeastern Arizona will partner with the Museum at the festival, talking to visitors, interviewing festival personalities, and adding their own fun to the event with their live broadcast.

While enjoying entertainment under the big tent, take a taste of ages-old traditional Hopi foods - yeasted bread baked in an outside wood-fired bread oven, and piki, a ceremonial food made from blue corn. Alice Dashee, a potter and educator, will talk to visitors about the role of corn in Hopi culture. Jessica Lomatewama and Alberta Selina will demonstrate the different styles and nuances of Hopi basket making. They gather and dye their own materials and will show how they use them to create plaques. Potters Dorothy and Emerson Ami create pottery in the traditional Hopi way, from gathering the clay, to using all natural pigments to paint them and sheep dung to fire them. And all types of Hopi weaving are done by men; Louis Josytewa and Austin Coochyamptewa will demonstrate sash weaving. The long, colorful sashes are used as part of ceremonial clothing.

Outside in the museum's courtyard, kids and creative individuals will be able to make Hopi inspired take-home crafts. This year, visitors will learn how to make Corn Flowers from real cornhusks and corncobs, Basket Plaques from colored paper plates, and Bookmarks.

As a special celebration of this 79th year, the Nuvatukya'ovi Sinom Dance Group will perform in Flagstaff's Fourth of July Parade on July 4.

Now celebrating its 84th year, the Museum of Northern Arizona has a long and illustrious history and evokes the very spirit of the Colorado Plateau. It serves as the gateway to understanding this region, with nine exhibit galleries revealing Native cultures, artistic traditions, and natural sciences. MNA's four Heritage Program festivals highlight the region's cultures and encourage communication and the exchange of ideas between visitors, educators, and artists. More information about MNA is at musnaz.org. Information is also available by phone at (928) 774.5213.