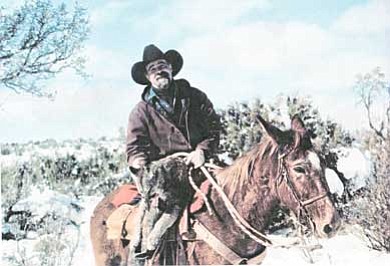 As a child, he enjoyed spending his summers on the ranch in Superior, Ariz. with his grandmother Frances and grandfather.

Marc was a carpenter who did a lot of construction work in the Flagstaff area before moving to Williams. He married Teresa Gonzalez in November 1980. In 1984, they were blessed with a baby girl named Mareesa, who quickly became the apple of her daddy's eye. They had many good times fishing playing softball and did a lot of hunting together.

Marc and his wife have owned and operated the World Famous Sultana Bar and Canyon Club for many years. He cherished his many friends and patrons he acquired at these businesses.

Marc was an avid hunter and outdoorsman. He was considered one of the best mountain lion hunters around. He also enjoyed trapping, fishing and guiding. Some of his most cherished memories were of his Alaskan adventures, during which he hunted moose, caribou, bear and mountain goat. He clearly loved his mules and cowboying on the ranch as well as his elk and mule deer hunting.

Marc fought a courageous battle against cancer for eight years. He will be dearly missed although we take great comfort in knowing he has gone to hunter's heaven.

Marc is survived by his wife of 32 years Teresa, and daughter Mareesa of Tempe, Ariz.; mother Gloria Stevens; one brother Michael; two sisters, Chris Sanders and Monica Kelly; and numerous nieces and nephews.

Funeral services were held Saturday, June 16, 2012 in Williams. Interment was in Williams Cemetery.

Norvel Owens was in charge of arrangements.