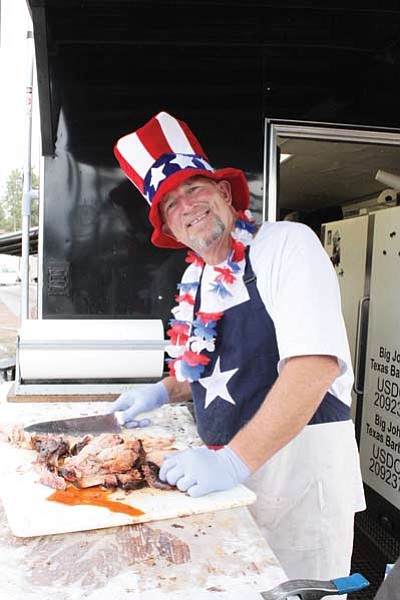 TUSAYAN, Ariz. - During the Tusayan Fourth of July Celebration, Flagstaff-based Big John's Texas BBQ will be serving up some delicious culinary delights, so make sure to have plenty of napkins on hand.

Big John's Texas BBQ is not only authentic, but the family owed establishment also offers a wide range of delicious mouthwatering treats for meat lovers, cooked and sold of the back of their custom barbecue trailer.

Angie Crim said she and her husband John are excited to be part of the Tusayan celebration for the second year in a row.

"We'll have our barbecue nachos which are really popular. They have beef brisket or pulled pork, with nacho cheese and jalapenos on top. People love them," Crim said. "We'll also have our beef brisket and pulled pork plates with our homemade cowboy beans and potato salad."

New on the menu is their Texas sweet tea and lemonade, all made fresh on location, perfect for washing down the last of those tender baby back ribs or pulled pork sandwich.

"They are great summertime drinks and people really enjoy those," Crim said.

As early as high school, Big John was barbecuing. Born and raised in around the Dallas area, John would often hang out at the famous Louie Mueller's barbecue restaurant and observe how carefully they cooked their award-winning barbecue. Later, John was invited to be a barbecue sauce judge at the Taylor International BBQ cook-off. Enjoying the atmosphere of the barbecue area made him really challenge his own skills, which really was the beginning of his career. He learned that with BBQ, slow and low is the key to great, juicy, mouth-watering meat.

"We slow smoke our barbecue on oak wood for about 14 hours, so it's a little different treat than just a hot dog or a hamburger," Crim said. "We smoke it until the meat is tender and falls apart, then we put our homemade barbecue sauce on it."

Founded in 2006, Big John's Texas BBQ was started by the Crims because there was a need for authentic Texas barbecue in northern Arizona. Big John started out going to events with a pop-up tent and a Big John's Texas BBQ banner. Everywhere Big John went, he sold out, causing the traveling restaurant to invest in a custom barbecue trailer. The trailer has allowed for Big John to travel all over Arizona and California for events and competitive cook-offs. During the summer and fall months though, will often find Big John's Barbecue set up in two locations on Route 66 in Flagstaff selling barbecue to locals and visitors alike. The restaurant also has a location in Page.

"We like to say that when people get our barbecue here in Arizona you get a little Texas in Arizona," Crim said.

As long as Tusayan's Fourth of July event is happening, Big John's Barbecue will be there. So be sure to pull yourself away from the dance floor, or any of the many fun activities on tap during the event, to visit them once, or even twice.

For more information about Big John's BBQ, just one of the caterers for Grand Canyon's Fourth of July Celebration, visit www.bigjohnstexasbbq.com.