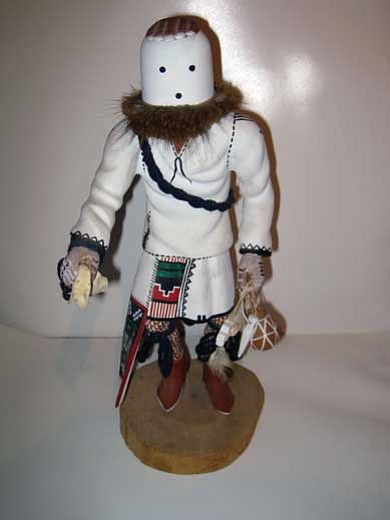 Timed in the afternoon, to allow collectors the opportunity to browse contemporary art in the 79th Annual Hopi Festival at the Northern Arizona Museum, the First Annual Hopi and Native Art Auction will start at 4 p.m. and offer items from the past to be purchased by the highest bidder. The auction will showcase items mainly of a more historic nature, in contrast to the museum show where only new art is presented.

Artists whose work will be represented include Charles Loloma, Ray Naha, Jacob Koopee, Fanny Nampeyo, Cliff Bahnimptewa, Rondina Huma, Karen Abeita, Neil David Sr., Henry Shelton, and Nona Naha, among others. Historic items will include baskets, pottery paintings, katsinas and weavings. One of the most distinguished experts and practitioners of Hopi culture, especially the arts, Secakuku will not only attend to comment on the authenticity and significance of the more than 200 items offered for auction but also answer any additional questions attendees may pose. As in most cultures, Hopi art is heavily influenced by religious and spiritual practices. Secakuku has written, lectured, and participated in Hopi spiritual activities since his birth, having grown-up on the Hopi reservation. Based on his advanced degrees in anthropology, the Phoenix based Heard Museum selected Secakuku to write the book explaining the importance of former Arizona Senator Barry Goldwater's katsina doll collection, which had been donated to the Heard.

In his widely quoted book "Hopi Kachina Tradition" Secakuku explains, "My life objective is to preserve the beauty and the value of our belief system rather than watch it die out." Most Hopi art appeals to non-Hopis due to the aesthetic references to the katsina focused religion. Hopi arts and craft objects are typically created from a reference to some aspect of Hopi ceremonial life; the baskets and pottery that distinguish Hopi art usually bare some imagery adapted from the katsina figures that appear in ceremonies conducted the 12 Hopi villages each year. The most notable Hopi art items that will be available at the auction will be the myriad of katsina dolls. Highly prized by collectors, these dolls are carved from cottonwood to resemble any number of the hundreds of katsinas that exist in Hopi culture. Some katsina dolls, typically older from the early 20th century, have even sold at auction for hundreds of thousands of dollars. This year's auction will feature some of the finest work by the most collectible contemporary carvers, including Secakuku. Prize-winning pottery by Jacob Koopee and Hisi Nampeyo will also be part of the offerings.

The auction preview will begin at 2-4 p.m. at Flagstaff High located at 557 N. Bonito St. Flagstaff, AZ, 86001. Anyone with questions or native art for sale is asked to contact auctioneers at Elp72yes@live.com.