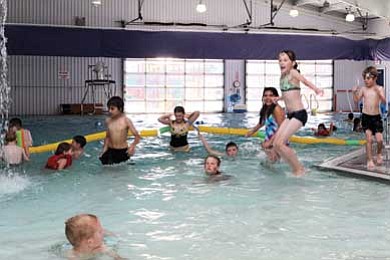 A young diving enthusiast leaps into the pool. An additional 50 people can now take advantage of free swimming lessons this summer thanks to the Greater Williams Community Fund. Ryan Williams/WGCN

Giving the members of the community an opportunity to receive free swimming lessons was the service project for the organization for 2012, according to FWAC Chairman Mike Dulay. Giving people the opportunity to receive free swimming lessons when they otherwise wouldn't due to costs is important for water safety, especially during the summer months around Williams when many people spend time at local lakes enjoying the summertime weather. So far in 2012, there have been 75 water-related incidents in Arizona, according to the Children's Safety Zone, an organization that tracks those numbers. Of the 75 incidents, 22 resulted in fatalities, including 9 children.

In 2011, FWAC sponsored a four-week extension of the operation of the Williams Aquatic Center, which was aided by a $500 grant from the GWCF last summer. FWAC is continuing to research grant possibilities as well as fundraising efforts, which the group hopes they can use to assist the city of Williams in re-opening the Williams Aquatic Center on a year-round basis. The aquatic center opened in 2002, and operated year-round until January 2010 when it was closed by the city of Williams due to budget constraints. For the past three summers, including this year, the aquatic center is only open during the summer months due to issues with the PoolPak, the climate control system for the building, along with high staffing costs.

The GWCF was established in 2005, and awards grants to various community organizations each year. As of 2011, it had awarded nearly $30,000 in grants to groups such as Camp Civitan, Williams Food Bank, Williams Recreation Department, Williams Senior Center, and many more.

If you are interested in a free swimming voucher, please call Clare Hydock at (928) 235-5321, or en espanol, Kris Vasquez at (928) 863-2467. These will be the final free vouchers available for 2012, although the Williams Aquatic Center will still be booking swimming lessons for a cost if you do not have a voucher.