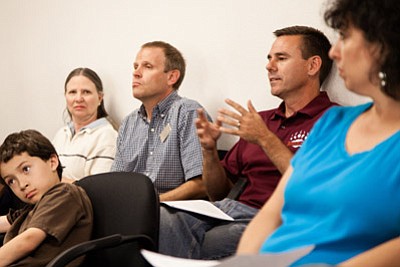 WILLIAMS, Ariz. - A proposal to decrease the Bed, Board and Booze tax in Williams by a half percent and subsequently raise sales tax by a half percent in order to fund a robust streets improvement program will likely be modified after protest from some members of the business community.

Williams City Council members again discussed the change in tax rates during a special meeting held June 7. After an hour of discussion, council members directed city staff to adjust the proposal to eliminate the city's food tax in lieu of reducing the BBB tax.

Concerns from community members in attendance regarding the initial proposal were varied.

Jeff D'Arpa questioned whether the city's streets were really in need of much repair.

"I drove around again throughout Williams, and I didn't drive through one pothole today," he said. "Granted, I'll give it that the streets are alligatored and a lot of them need work. But, I'm more familiar with the parks. When my children are here, we visit the parks. We use Cureton and the other parks and the recreation center. What's going to happen to those? That's a quality of life issue. I just don't see the streets as a real dire need."

Councilman Don Dent suggested D'Arpa take a drive with him to survey the condition of the streets in Williams.

"I'll take you into the residential areas where we have major pothole problems. Major road damage," he said. "Not minor. I mean, we've got places you can lose a Volkswagen in."

Highway User Revenue Funds (HURF) used to fund the city of Williams' road program but due to Arizona's own budget issues, those funds currently amount to around $35,000 in Williams' budget.

Sean Casey, CEO of Bearizona, questioned whether decreasing funding granted to the Williams-Grand Canyon Chamber of Commerce for tourism promotion was a good idea and voiced concern over raising an already high sales tax rate.

City of Williams Finance Director Joe Duffy said state shared revenues the city receives are based on a 3,000-person population but that the city's infrastructure must support 1,800 hotel rooms and county residences - something that drives a higher sales tax rate.

"On any given day, we probably have 7-8,000 people, I mean is that a safe assumption, in town," he said. "So, our infrastructure has to be geared for that but our state shared revenues are only geared for 3,000. If we weren't a tourist community off a major interstate, we could cut our budget significantly."

Casey said marketing is crucial to the city of Williams' revenue stream.

"If you believe in marketing, you know that does return some multiplier of revenue here," Casey said. "AOT's number is 15 times. And that's tax money."

Casey added that chamber officials would like to see BBB tax remain at 1.5 percent.

"Because, we think it is so important to marketing," he said, adding that Williams has weathered the recent economic downturn because the product continues to get better with a strong focus on marketing.

Councilman McNelly asked if the Chamber had considered other ways to generate revenue other than relying on the city's taxing authority.

Casey said it would be difficult if the chamber were forced to focus on fund raising to at the same time be effective in its promotion of Williams.

D'Arpa said that kind of focus shift would be detrimental to local business.

"We want them to promote for the community and use their efforts to market and be visible with proper promotions out there," he said.

Duffy reiterated that the proposal only cuts tourism and promotion by $25,000.

Payne said budgeting is a tough process because streets need repairs while at the same time business owners in town don't want to see taxes raised.

"But, there is a dire need in town for streets," he said. "I'm with Don. People need to cruise around on some different streets and in my opinion if we don't do something now, it's going to get more and more and more expensive as we go. Because now you're talking digging them out and redoing them."

According to Dent, the proposal allows for $35,000 more funding for recreation. He requested some of the funding go to maintenance with the remaining $20-25,000 put aside each year in an effort to save for possible baseball field construction down the road.

Moore asked if the proposal satisfied chamber representatives in the audience.

"I would say to the chamber be thankful you've got a council that supports the chamber as strong as we do," Moore said. "Same time, we've got to support the people."

Dent said the Chamber of Commerce is the lifeblood of the town.

"We live off our tourists," he said. "They pay 64 percent of our sales tax. They pay 65 percent of Bed, Board and Booze tax. We live off of them and we need them here. But, if we're going to increase our sales tax, then I think for our locals' benefit, we need to reduce our food tax by 2 percent because that's who pays that the most."

A member of the audience asked if the sales tax increase and corresponding decrease in food tax would remain after roads have been repaired.

"I hope we keep it forever," Moore said.

Casey asked if the 65 percent allocation of BBB tax to the chamber would be solidified for coming years.

Dent said that number could vary from year to year depending on who sits on the council.

"It's never going to be locked in stone 65-35 because there may be years, and there were years several years ago, when we actually spent more on recreation," Dent said. "It's going to be based on needs and who is sitting on the council and what they see as the priority."