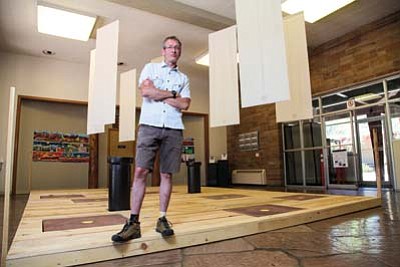 Installation artist Shawn Skabelund stands on his recently completed work, located in the Grand Canyon National Park Headquarters. The work, entitled “The Price of Entrance” will be on display through Sept. 15. Ryan Williams/WGCN<br /><br /><!-- 1upcrlf2 -->

GRAND CANYON, Ariz. - When you think of Grand Canyon National Park Headquarters, you likely don't think installation art gallery. But, through Sept. 15, the headquarters building is hosting a large-scale work by artist Shawn Skabelund that tackles the history of uranium mining in close proximity to and inside the park.

The work, entitled "The Price of Entrance," focuses primarily on the history of the Orphan Mine and was completed May 31.

Skabelund began researching the history of the Orphan Mine along with other possible uranium mining near Grand Canyon during his residency as part of the South Rim Artist in Residence (AIR) program last May.

His interest in uranium mining in the area began 14 years ago when Skabelund moved to Flagstaff.

"Just hiking or walking along the west rim trail and coming to a chain link fence, I was startled to see signs that say this is a radioactive area," he said. "So, I thought, someday I'm going to look into this and do the research and find out what it was all about."

Skabelund spent time during his initial residency in the library and archives researching the history of the Orphan Mine in an attempt to understand why and how the U.S. government and park service allowed uranium mining to take place so close to a national park.

He said he found his answer.

"It was called complacency and apathy and a lot of things," he said. "What people don't realize is the Orphan Mine wasn't part of the national park. It was surrounded by a national park."

Dan Hogan, who held the original claim, eventually put the mine up for sale in 1932.

According to Skabelund, uranium wasn't discovered at the mine until around 1950 shortly after a Madeline Jacobs from Prescott bought the property in 1947.

"So, for 15 years it was up for sale and why didn't the government buy it?" Skabelund said.

In 1953, Golden Crown, a subsidiary of the New York-based Western Gold and Uranium, Inc., purchased the property and developed it for uranium mining. Within a few years, 45 tons of ore a day were being hauled up the side of the Grand Canyon to the rim. The ore was then shipped by truck, through the park, to the Grand Canyon Railway to a processing mill on the Navajo Reservation.

In 1961, Western Equities, Inc. approached the Park Service regarding mining on Park Service property around the mine.

"It was through blackmail and the help of Arizona congressmen and senators that they were able to swindle the government," Skabelund said. "They ended up mining in Park Service, public land."

The mining continued into 1969.

While Skabelund delved into the history of uranium mining before beginning his current piece, Skabelund said the installation in park headquarters is more concerned with contemporary uranium mining issues and formulated prior to Secretary of the Interior Salazar's recent ban on new uranium mining claims in the area.

Skabelund's work is site specific and place based meaning each piece is designed for the space it will inhabit. All materials, as much as possible, are indigenous.

"Also, it is place based because the theme of the work is pertinent to the area," he said.

Skabelund's initial research helps him determine what materials can be used that will act as vehicles for the metaphors or symbolism he wishes to convey in the work.

Following his residency, Skabelund traveled to Italy and lived in Sienna for four months where he began to formulate the design for the installation after determining that park headquarters, despite his hope of using the newly remodeled visitor's center, would likely be the location for the piece.

While conceptualizing a new work, Skabelund said he focuses on unique features of the space the work will inhabit in order to incorporate them into the piece. In the case of park headquarters, he integrated a map on the floor featuring eight specific areas along the Colorado River.

Skabelund used the map as the basis for his drawing, always where he starts when beginning an installation piece. He built a wood floor, cut windows into the floor above the eight locations on the map before filling them back in with pine pollen.

After finding the remains of the old Grand Canyon Village sewer line, including trestles, lead pipes and ceramic pipes, during a walk during his residency, Skabelund found a way into the piece.

"These pipes are beautiful," he said. "That was the first material. How can I design an installation using this stuff?"

Jan Balsom, Grand Canyon National Park chief of cultural resources, allowed Skabelund to move some of the historic material for the project.

"The art gods were working with me because, here the pollen season is right now. Late May and June," Skabelund said. "So, I thought, 'well, I can't use pollen.' I get to Italy and its late October, November. And, lo and behold, I'm walking back to the apartment one day and there are these pollen cones all over the ground. And I said 'my goodness, that's serendipity.'"

Skabelund collected thousands of pollen cones, cleaned them and sifted out the pollen to use in his piece.

An artist statement accompanies the work to give the viewer a vehicle into the thought behind the physical art. Skabelund said he was more than willing to work with Park Service officials to craft a statement everyone involved could live with from a political standpoint.

"This is not a not for profit gallery space like I'm used to where I can put anything up," he said. "I'm going to work to a point. We don't want to water it down so much. So, what we have is an artist statement, which I've written. Which I'm happy with."

"His willingness to revise his statement so it was suitable for a federal building and an all ages audience and an international audience was really what made it a successful pairing," she said.

A second document delves into the history of the Orphan Mine and the Grand Canyon National Park and a third document included alongside the installation lists all the materials used.

"I'm a conceptual artist and I taught art for almost 20 years," he said. "I'm a believer that, at least for my work, art is about educating the public. The viewer."

Westbrook said the Park Service at Grand Canyon has shown its commitment to contemporary artists and their idea driven work by allowing artists like Skabelund to participate in the AIR program.

"Just by Shawn being selected and supported from the beginning indicates the broader support," she said.

She added that Skabelund's residency was somewhat of a test case, as the AIR program had not hosted any overtly political work up to this point.

"It was vetted from the top down," Westbrook said. "The response from the Park Service folks was unanimously enthusiastic and supportive."