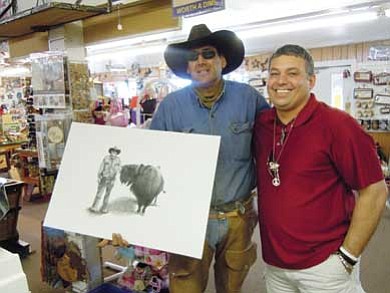 WILLIAMS, Ariz. - Gary Robert, employed by the Deer Farm since October of 2011, came upon a solemn looking guest in Ted Marple while he was tending to the bison. Robert invited Marple to come take a closer look at the magnificent creatures and asked him what brought him to the farm that day. Marple mentioned to Robert that he and his wife has just recently lost their daughter in a car accident in Phoenix and were visiting the animals for some comfort in their time of grief.

After a lengthy conversation where both men expressed their passion for bison, as well as other personal discussion topics, Robert went to his cabin to retrieve something. He returned with a book entitled, "A Buffalo in the House" by R.D. Rosen, a book given to Robert during a trying time in his life. Robert presented this book and a piece of hide from a bison to Marple.

Marple returned to the Deer Farm shortly after their initial meeting to present Robert with a gift of his own. As an artist, Marple was able to create a charcoal drawing of Robert and a buffalo from three photos he received from Pat George, owner of the Grand Canyon Deer Farm.

Robert was so touched he once again left for his cabin only to return with yet another surprise for his new friend. Robert handed Marple the first award he had ever won as a working stuntman in Hollywood.

With both men now learning of each other's professions, Robert proceeded to tell Marple even more about his over 30 years working as a professional stuntman. At 17 he was Eric Estrada's stunt double, drove the General Lee in all car crashes on the Dukes of Hazard, and worked on several blockbuster films such as Dances With Wolves.

Gary Robert has lived a life full of unbelievable, daring stunts, and now wants to work with the animals he came to love during his movie days. And just like his new friend Ted Marple, his most beloved animal is the bison.