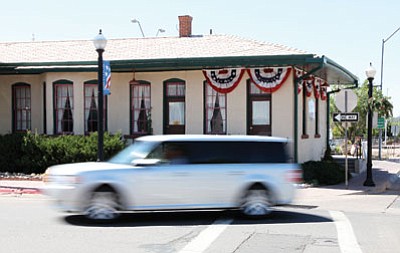 WILLIAMS, Ariz. - A plan to raise sales tax in the city of Williams by .5 percent while lowering Bed, Board and Booze tax by .5 percent has caused a bit of a stir around town. As a result there will be a special city council meeting tomorrow evening at city hall.

"Council has requested that a plan be formulated to free up $400,000 yearly for the next several years to repave and repair the streets in our community," stated Joe Duffy, finance director for the City of Williams. At the May 23rd council meeting Duffy went on to explain that retail sales taxes must be raised to accomplish this.

Under the plan formulated by Duffy and City Manager Brandon Buchanan, the city sales tax rate would increase by half-percent on all non-food items and the BBB tax would be lowered by a half percent. These changes would generate over $500,000 in additional revenue yearly to the City. The new city sales tax rate would climb from its current 10.725% to 11.225% making it one of the highest rates in the state. Cities close to Williams have the following general retail sales tax rates, Flagstaff at 9.446%, Tusayan at 9.725% and Kingman at 8.85%.

Councilman Don Dent stated that small towns have faced funding cuts from federal and state programs and the City of Williams has no options but to increase taxes to repair the deteriorating streets in our community.

Mayor Moore concurred with Dent and said the council has a responsibility to all the citizens in the community and that he has been hearing many complaints from residents wanting to know when the streets in town will be repaired.

Several members of the Williams-Grand Canyon Chamber of Commerce were present and spoke to the issue of raising taxes. Concern was also expressed over lowering the amount of dollars raised by the BBB tax used to operate the Visitors Center, marketing the town and providing adequate funding for recreational opportunities for children and residents.

"We appreciate the partnership we have had with City Government in increasing visitation to our community and providing jobs to our citizens," stated board member Doug Wells. "This partnership has worked, now is not the time to cut back on funding."

Sean Casey from Bearizona spoke of the need of constantly marketing our community and its attractions and encouraged the Council to open a dialogue with the Chamber.

Kent Jones requested that the City and Chamber meet to discuss options other than reductions to the BBB tax structure.

The council agreed to such a meeting and also will ask other stakeholders in the community to attend. This meeting will be held on Thursday at 7 p.m. in council chambers.

Council rejected a request to waive $1,400 in fees to Terri Beeson and her Rough Stock Rodeo for use of the Rodeo Ground over Memorial Days. Council members appointed Michael Vasquez and Mike Besler as members to the Municipal Development Fund. Council members also tabled an agreement to approve the Williams-Grand Canyon Chamber of Commerce to manage the Community Stage and Events Plaza until council has time to review the contract.