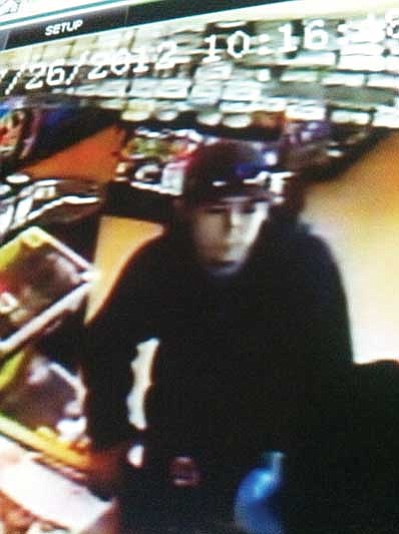 Upon their arrival Coconino County Sheriff's Office (CCSO) deputies and detectives learned that the suspect entered the store while customers were present, produced a handgun and told the clerk to give him all of the money. During this robbery the suspect obtained cash from the register as well as two wallets from customers who were present. The suspect left the store on foot and was last seen west bound from the Shell Station in the direction of Interstate 17. The suspect did not discharge his weapon and no one was injured during the robbery.

CCSO deputies and Arizona Department of Public Safety officers are in the area attempting to locate the suspect who is believed to be armed and dangerous.

The suspect is described as a Hispanic Male, 5'4' in height, weighing approximately 140 pounds last seen wearing a ball cap, hiking boots, a dark blue shirt and light colored jeans. He is considered armed and dangerous and was last seen in the area of Highway I-17.

If you have any information regarding this robbery or see a person who is similar in appearance to the suspect description do not attempt to approach or contact him. Call CCSO at (928) 774-4523.