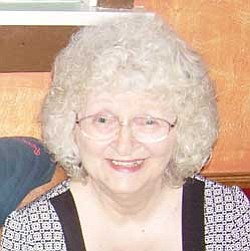 Sandra K. Sylvia, 75, was called home to heaven by our Lord and Savior on the morning of Saturday, July 14, 2012, peacefully in her sleep, after complications from a stroke.

She was born on Dec. 25, 1936 to parents Marvin Ray (Abe) Minnick and Lillith (Lily) Leith Minnick in Warren, Ohio, where she lived until she graduated in 1955. Sandy attended Kent State in Ohio then moved to Pasadena, Calif. to attend College and married Thomas James Sylvia III. She moved around quite a bit until moving to Los Alamitos, Calif. in 1976, where she settled to raise her children and lived for 29 years. In 2004 she moved to Williams, Ariz. to live with her daughter's family. In 2009 she moved back to California to be near her son's family.

Sandy enjoyed reading, doing needlepoint and spending time with her family. She was a wonderful person, mother and grandmother. She will be greatly missed by all who were blessed to have known her and by her gentle, kind & loving Spirit.

R.I.P Mom, we will miss you so much, until we are all together again. A celebration of Life Service will be held on Saturday, Aug. 4, 2012 at 2 p.m. at Los Alamitos Recreation and Community Services Department, 10911 Oak St. Los Alamitos, CA 90720.