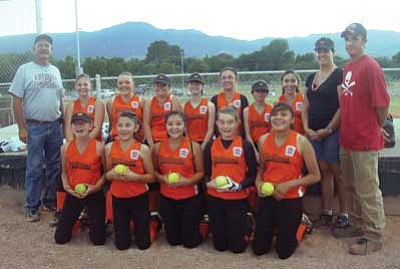 WILLIAMS, Ariz. - The Williams Little League All-Star softball team wrapped up the recent District Tournament with a strong second place finish. The Williams All-Star team was comprised of girls ages 11-12 from Williams, Seligman, and Ash Fork. After competing against each other throughout the regular season it was time to come together and compete as a team.

The first game of the tournament saw the All-Stars matched up against the Dewey-Humboldt All-Stars. In the first inning with two outs, a Dewey-Humboldt player hit the ball to the fence, quick action by the left fielder and a strong relay by the third basemen led to the Williams All-Stars stopping the run at the plate. With this play the team's confidence skyrocketed and their attitude toward each other reflected that of true team spirit and chemistry.

A run in the tournament was on.

The Williams All-Stars stopped the Dewey-Humboldt All-Stars in a 10-run shortened game, 24-3.

This victory sent the Williams All-Stars into the Championship game.

Coach Lewis Hume expressed his gratitude to the Williams Little League Staff for organizational efforts that got them into the tournament.

"The parents, family and friends of the players, you were great, your support, cheering and encouragement helped make this a most enjoyable time," said Hume. "All-Star players, you were great. You came together as a team, played hard-nosed softball and enjoyed a good experience in competition. Your positive attitude toward the coaching staff, your position on the field and all aspects of the game were great.

"Congratulations on a good run. Thanks for making this an enjoyable and memorable experience for all."