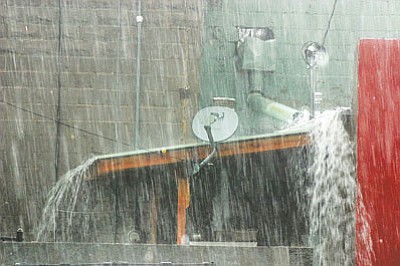 WILLIAMS, Ariz. - With summer officially already under way, and an unusually warm spring now behind us, monsoon season has begun. At this point the Climate Predictions Center, which predicts seasonal forecasts beyond the typical weekly forecast, is calling for nothing too unusual or out of the ordinary for this time of year in northern Arizona.

Predicted storms, heavy rains, and monsoons are not expected to vary from their usual date range. Normal variability for precipitation with the monsoon season, and the average or typical onset from these weather conditions are expected as well.

"We've had a pretty warm spring, as people know, across the entire state and on up further north and east across the Colorado Plateau," said George Howard, warning coordination meteorologist for the National Weather Service. "Sometimes when we get more intense heating than average, over the Colorado Plateau, it sets up a thermal low pressure system that can draw moisture northward a little earlier."

According to Howard this moisture drawn northward, due to the warm spring and somewhat intense heat, is the only thing that could potentially alter the monsoon season and perhaps cause it to begin a day or two early.

"But we do have the general pattern in place. While we haven't seen really any storms in our area here - Williams, Flagstaff, and so on - there have been thunderstorms to our east. Anywhere from Winslow [Ariz.] on over to the New Mexico border, north onto the Navajo Nation, and south down to the White Mountains," added Howard.

Howard also mentioned though that what is not being seen is the deep moist flow that is typically seen moving northward across the state.

"There is no broad moist flow coming up yet," he said. "It is spotty and confined to the eastern portion of the state right now. So while there is moisture in the mid-levels, there are not very many moist conditions down here at the surface."

Of course this means that right now is a dangerous time in the fire season, fuels are still quite dry out there because the air has not moistened near the ground. Also, thunderstorms produced early in the monsoon season can produce a good amount of lightning and perhaps not much rainfall. This can be quite problematic for fire starts.

"We're not suffering like the folks are in Colorado right now, but earlier in the fire season we have had some significant burns," Howard said. "Whether it was the Gladiator Fire down near Crown King or the Poco Fire which is just wrapping up down by Young."

"We are aware of what dry air near the ground means, and what lightning storms can cause," said Moore. "We and anyone within the forest need to know the dangers present and take the necessary precautions."

Besides fire, other areas of concern brought up by Howard regarding recent weather developments, is that people should know how to properly prepare for dramatic weather shifts and safeguard themselves against the hazards these thunderstorms can produce.

Howard urges people to protect themselves from flash flooding, lightning, and strong winds. He suggests finding a sturdy building and remaining inside to safeguard oneself from both lightning and strong winds. For flash flooding, just use common sense. If water is completely covering a known walkway or moving rapidly across a roadway, either wait and let it subside or find an alternate route. It is never worth the risk to try and cross a flooded road or pathway, especially since it is almost impossible to discern just how deep the water or how strong the current may be.

In addition, Howard warns hikers and campers to be aware of their surroundings and know where to safely go about their business. He emphasizes no hiking or camping down in dry creek beds or dry river beds, also known as arroyos, because a thunderstorm could be miles away dropping inches of rain upstream from them and they might never even know it.

Monsoons around the corner
Temperatures set to increase as monsoons draw near
Dry winter on the Kaibab sparks fire fears
Monsoon precipitation up in the air
Relief from the heat: Isn't it monsoon season?
Event Calendar