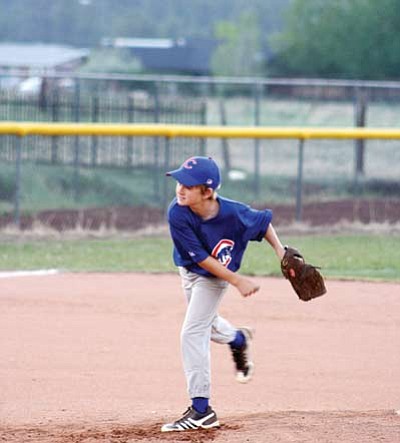 Players on the Ash Fork Cubs excel on both offense and defense. Submitted photos

ASH FORK, Ariz. - Congratulations are in order to the Ash Fork Cubs for finishing the Williams, Ariz. Little League 2012 season undefeated. All six teams in the league, for 9-12 year-olds, played hard and with passion, but only one can ultimately be crowned league champion.

The Williams Little League consists of the Parks, Ariz. Pirates, the Ash Fork Cubs, and four teams from Williams - the Yankees, Diamondbacks, Dodgers, and Giants.

The Cubs finished the regular season with no losses and only one tie, due to that game reaching its two-hour time limit. The Williams Giants played the Cubs to that tie, and was the only team all year that came that close to defeating the Cubs this season.

Heidi Howard, wife of Coach Ron Howard, expressed how proud she and all the other parents, coaches, and fans are of the Cubs players.

"The kids played so hard overall and hit very well this year," said Howard. "We just want them all to know how really proud of them we are."

After the regular season, the Cubs then played in the Williams City Tournament facing the Giants again, then the Yankees. The Cubs won both games and the tournament to officially be called Williams Little League champions.

Due to being the winningest team this year in their league, the Cubs did end up going to Prescott Valley to play in a separate Tournament of Champions, which invited teams from all over the region including Chino Valley, Prescott, and more. The Cubs lost to Camp Verde, who eventually would go on to win the entire tournament. This tournament did not count towards regular season or city tournament games.

A total of 12 players were selected from the Williams Little League to represent their league as All Stars this season. Five players from the Cubs were chosen for the 11-12 year-old All Star team. The All Star games began Monday in Cottonwood, Ariz.