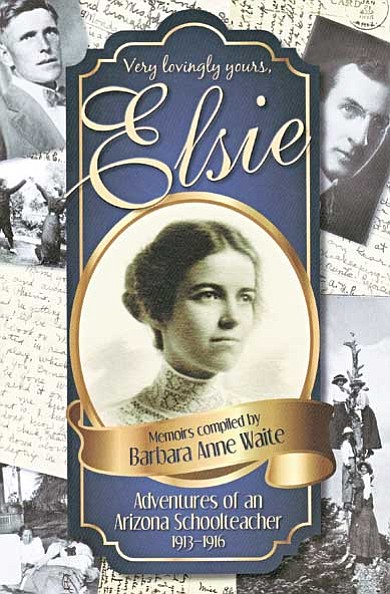 “Very lovingly yours, Elsie” is available at the Williams Public Library and for sale at amazon.com.

"There was this cowboy ..." Elsie said, and then stopped.

Waite compiled Elsie's memoirs, which are now available in print. The book is full of history pertaining to the communities of Cornville and Williams. The book - Very lovingly yours, Elsie: Adventures of an Arizona Schoolteacher 1913-1916 - is available on Amazon.com. The book can also be borrowed from the Williams Public Library, 113 S. First St. To learn more about Waite, visit www.barbaraannewaite.com.

Elsie Hayes was 25 when she came to Cornville, Ariz. as a mail order teacher. The teacher's tiny shack in Cornville was a far cry from her family's lovely home in Long Beach, Calif. She drank water from an irrigation ditch, bathed in Oak Creek and taught in a one-room schoolhouse. She came to Arizona feeling a bit superior to these "common" children, but soon she developed a mutual love.

In September 1913, Elsie and fellow teacher Marguerite Melick traveled by train from Los Angeles to the farming town of Cornville. The last 26 miles of their journey by train was from the Santa Fe main line near Prescott via the narrow gauge United Verde and Pacific Railway. The line ended at Jerome, which was once the third largest town in Arizona. Fellow passengers described Jerome as "the wickedest town in America."

The two schoolteachers would spend the night in Jerome prior to riding a stagecoach into Cornville the following day. Elsie remembered spending a frightening night in Jerome where the streets were filled with "foreigners, drunken men and Indians wrapped in blankets."

Once in Cornville, Elsie and Marguerite were a bit uneasy with their rural living conditions. Marguerite questioned Elsie about drinking water, how they would take a bath with no tub and how they would wash clothes. Elsie assured Marguerite they would adjust. The appearance of the one-room schoolhouse did not reassure Marguerite. It was a plain, unpainted wooden structure with a large wood stove. The girls were told that the ugly brown stains running down the walls were left by cowboys who had spit tobacco juice when the school was used for dances.

Elsie soon learned of the strict rules for Arizona's teachers in 1913:

• Teachers are not to keep company with men.

• Women may not dye their hair.

• Two petticoats must be worn.

• Teachers may not loiter downtown in ice cream stores.

• Dresses must be no more than two inches above the ankle.

• Teachers are not to dress in bright colors.

Elsie taught in Cornville for less than one year and arrived home in Long Beach, Calif. on April 20, 1914. She spent the summer studying at Pomona College, attending social events with friends and enjoying time with her family. However, Elsie wanted to return to Arizona. She wrote letters applying for teaching positions to schools in Arizona. In July 1914, Elsie was hired as a schoolteacher in Williams.

Elsie arrived in Williams Aug. 29, 1913. In her diary, Elsie wrote, "Breakfast on diner, at 7:25 reached here, met by Mr. Winans, Mr. Youngblood and Minna Wissing. Breakfast again at the Winans' then got settled in new home, 'The Dovecote,' with glee. Mr. Y. helped us 'lay in groceries.' Reception for teachers at night."

"Aug. 20, Sunday. Went to Episcopal Church with Miss Collins, and liked it. After dinner went 30 miles with the Polsons in their machine to their cattle ranch, the 'Flying H.' Wrote home. Mr. Youngblood and Mr. Gold called. Feel much at home."

In a letter Elsie penned to her family on Aug. 30, 1914, she explains how much she is enjoying Williams already. She loved the scenery, the pine trees and rides in the Polson's "machine."

"The Williams people of the better class seem to be unusually fine ones," she wrote. "The town swarms with little children! The streets are all of dirt and the sidewalks wooden. The citizens say it is a very safe place so long as one doesn't wander at night into the saloon section, which I think is farthest possible from us.

Elsie seemed to enjoy her first school year in Williams. When she was not teaching she could be found socializing with friends, walking the hillsides of Williams, walking across Santa Fe Dam, exploring surrounding communities - particularly the Grand Canyon and acting in plays and watching plays at the Sultana Theater. She reluctantly left Williams to return to California on June 5, 1915.

"June 5, 1915, Saturday. Train. Farewells to Williams. The children blest me. Sugar with me to Needles. Have written to Alice in my berth. I cannot say what I feel. I shall try to live truly," Elsie wrote. She returned to Williams in late August. "Aug. 30, Monday. School, though not regular work. I have 10 classes, three H.S. English and grade Grammar and Reading and Spelling in 7th and 8th and 7th Geography. Enthusiastic over work and glad to see children."

In early 1916, Elsie describes "a wild blizzard" the night of her first date with a gentleman named Jack Roberts and that is just about how he blew into her life.

"Jan. 28, Friday. Plunged through snowdrifts. Mr. Roberts cleared our paths and came on errands. Went with Mary and Mr. Sweeney to dance and card party. Enjoyed it. Home at 3 a.m."

"Jan. 29. Saturday. Rose at 11:30 a.m. (disgusted with William's hours) and went after my carnations won as a card prize last night and left at Parish House! We went with Mr. Roberts to choir practice. Interesting talks with Mr. R. who is Welsh, Nephew of David Lloyd George [Prime Minister of England]."

"Jan. 30. Sunday. Plunged through the snow to church. We walked with Mr. Roberts to the dam, took pictures."

In a March 29, 1916 letter to her mother, Elsie writes that her feelings for Jack Roberts are intensifying and she writes of a possible pending marriage.

" ... I do think Jack is an unusually fine specimen of manhood. He's over a year younger than I, but seems older. We are wonderfully congenial in most ways. He says he'll give me time to think, and he'll secure a position in Southern California about the time I leave here, and then he'll bring a diamond if I let him. Jack is thoroughly Americanized, except for his accent, and has taken out his papers. He says he knows he will never live in Wales again and unless I refuse him."

Elsie's mother replied to her letter on March 31, 1916. "Your very interesting letter received yesterday. From what you have told us of Jack he must be fine. It seems odd to me that you don't know whether you like him well enough. As to what we think of him or his people think of you is a very secondary matter to me. You are old enough to choose and if you love him, and he surely seems to love you, that ought to settle it. I know it is a serious thing, marriage always is. But ordinarily when two Christian people love each other it ought to be right and proper for them to marry. It would make me very happy to see you married to a good man whom you loved. I surely hate to think of you teaching all your life."

Elsie's and Jack's engagement was announced in Williams on her mother's birthday, Saturday, May 27.

"December 25, 1916, Monday. Our Wedding Day! The living room was lovely with green and white. Mr. Hunt performed the ceremony, only the family there. Then Christmas wedding dinner and the tree. Amsbury Hotel, Elsinor for all night. The threads of my life!" wrote Elsie in the last entry of her diary.

Following her wedding, Elsie Reed Hayes resided in southern California. The couple had one daughter, Catherine, which is Waite's mother. She never returned to Arizona. Jack died at the age of 57 in 1947. Elsie died in July 1987, six months short of her 100th birthday.