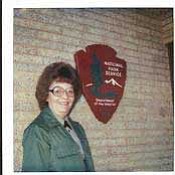 Sherma was born Aug. 7, 1935, near the Grand Canyon National Park to Sherman B. and Grace A. Moore. She was an avid outdoor enthusiast and conservationist, a passion that lead her to pursue a career in the National Park Service.

At a very young age, she dreamed of following in her father's footsteps of becoming a park ranger. However, never one to settle, she achieved the distinction of becoming the first women Superintendent in the National Park Service with her appointment to superintendent to Timpanogos Cave National Monument which led to her success being published in the Who's Who of Government. After a successful tenure at Timpanogos Cave she was then appointed to Unit Manager at Arches National Park. In 1982 she was appointed the Superintendent of Arches National Park. She then retired to spend many happy years spending time with her grandchildren and learning to crochet, which proved to be a passion she was very good at. She won many blue ribbons at the Utah State Fair over the next 20 Years.

She is survived by two sisters, Eleanor "Pinky" Oesdean and Ethel Cole, her three children Glenn Dean, Karen Wilkin and Duane Whitlock and her many grand and great-grandchildren. She was preceded in death and reunited with her daughter Elizabeth Anne "Lulee" Whitlock.

For all who knew her, she will not only be missed but her ability to tell a story by sharing her knowledge, humor and wonderful ability to teach each of us life lessons will be greatly missed.

At her request, no public services will be held.

A charitable trust has been set-up at America First Credit Union in Sherma Bierhaus' name to help with considerable expenses.