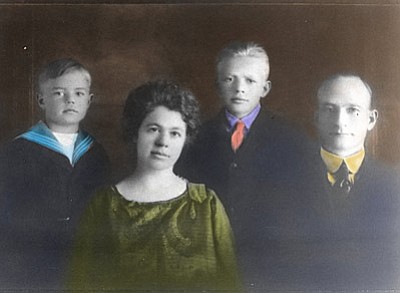 WILLIAMS, Ariz. - More than 100 years ago, the Cureton family laid the foundation for a legacy grounded in the importance of Williams public education. A legacy that began with a professor from Missouri.

Born in 1875 and raised on his dad's farm near Red Point, Mo., T.H. Cureton moved to Williams in 1906, where he taught for more than 20 years. Eleven of those years were spent as the school superintendent "Prof" Cureton held a life diploma for teaching in Montana and Arizona, and in total, taught more than 40 years. In addition, Cureton also earned a master's degree from Harvard University in 1910.

Not only was T.H. Cureton a teacher, he was a lawyer, too. In 1901, he completed a three year course at University of Kansas law school and was admitted to the bar there before he came to Arizona and was admitted to the Arizona Bar in 1912. Cureton was also a member of the house on the Third Arizona legislature as well as a member of the Tenth Arizona legislature, before Arizona became a state.

"There were about 15 cabins "Prof" had out there at his campground, and he caught mountain lions," his grandson Tom said. "He kept them in a cage outside his service station, as a kind of gimmick to get people to go inside."

In 1986, 5.6 acres of Cureton Park, originally purchased for around $1,000 by T.H. Cureton were donated to the city of Williams. The land was set aside for recreational purposes, and at the time, plans for a municipal pool, tennis courts, volleyball courts and exercise stations were in the works for the park.

Professor Cureton passed away in 1957 and his wife, Nellie King followed in 1960.

"Prof" had two sons, Carl and Miles Cureton, who both followed in their father's educational footsteps, also becoming teachers. Miles, the oldest son, began teaching in Williams when the depression hit in 1932.

"But over the years, the railroad and a big sawmill (Saginaw Lumber) were principal economic factors," Miles said in a 1986 interview with the Williams News. "Tours starting having some impact in 1922-23 because of the Grand Canyon."

Miles retired in 1974 after a total of 41 years as a teacher and principal at Williams with 28 of those years as elementary school principal.

His brother Carl attended school in Tempe 1931-3 and the University of Arizona 1933-36, studying education. He taught both elementary and high school for more than 20 years, retiring in 1957 to operate the Old Trails lumberstore. Many in the community may still remember Carl's love of Great Danes, which he regularly took for rides into town in the sidecar of his motorcycle.

"Normally my dad taught sixth grade," Allyn Cureton recalled. "I did a lot of stuttering when I was in younger, and my family thought it would make it better if I was in my dad's class at school. I'm not certain it made it any better."

Carl's wife Ruth was also an educator. An accomplished kindergarten teacher, in 1956 she organized the first private kindergarten in Williams and taught there until 1959 when she returned to Northern Arizona University to update her teaching degree. In 1961, she began teaching the first grade, continuing until 1969 when public school kindergarten was established. Returning to her first love, she taught Williams kindergartners until a terminal illness forced her to resign in 1971. That next year, the Williams School Board voted to designate the school kindergarten The Ruth K. Cureton Kindergarten in her memory.

In addition to teaching, Ruth was active in many civic and youth organizations, She served as president of the Williams Woman's Club and the Parent Teacher Association and honored with a lifetime membership. She was a leader of the 4-H Club and the local scouts.

Carl and Ruth Cureton had six children, five of whom are living. Allyn, Tom, Arlyn, Roxen and Dale.

Over the years, both Tom and Allyn have seen the town changing from a rugged, rural community to tourist-based economy, something their uncle Miles also saw happen as early on as the depression era.

But change also can come in other forms, maybe less obvious.

"As high school kids, we used to have drag races out at Barney Flats, out south of town," Tom recounted. "Well, Clark Cole, who was the sheriff, at the time came out there sometimes to make sure we were doing okay. They wouldn't allow you to do that now, but he sometimes actually drag raced with us in his patrol car. But no one talked about it because it could have gotten him in trouble. That's the difference between then and now."