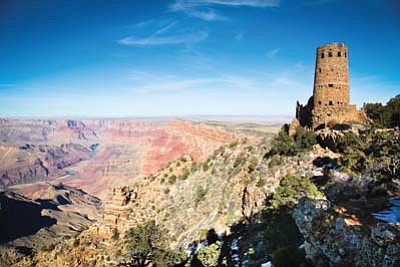 GRAND CANYON, Ariz. - Considered by some to be architect and designer Mary Colter's most imposing work, the Desert View Watchtower was the last of her eclectic, "from the earth" designs until she went on to remodel the Bright Angel Lodge in 1935.

From conception to construction, the building took three years to complete, designed to bear a resemblance to an ancient Pueblo watchtower.

Approaching the tower, one notices what could be passed off as a large pile of rubble right next to the structure, maybe construction material that no one collected. But it's there for a reason.

"She left this false tower right next to it, just to make it look like there was a previous one here which had fallen and then they had to build his new one," Xanterra employee and Grand Canyon historian Henry Karpinski told the Grand Canyon News. "Of course the towers that they built were not this tall. The ancient people here didn't build it."

The structure is a circular stone tower, intentionally designed to imply deterioration, an ongoing pattern in most of Mary Colter's visions at the Grand Canyon. It gives the impression of coming out of the earth, or started by some people and finished by others.

Karpinski explained that the Santa Fe Bridge Department put the framework together because ,as a railroad company, they had to build their own bridges.

"One of the things I like to mention, since we are talking Mary, is every rock is where it is because that is where she wanted it to be," Karpinski said while leading Grand Canyon News around the outer edge of the structure.

in an erratic, random fashion, with many of the windows themselves asymmetrical, much in the same vein of the Hopi House, Colter's earliest design, built 28 years prior.

The Kiva Room is the focal point of the base of the structure, which is roofed with logs that Mary Colter managed to salvage from the old Grandview Hotel.

"The hotel burnt down, and these poles lay around for generations in the dirt. They were already 48 years old when they were installed here back in 1933," Karpinski said while pointing up to the roof of the gift shop, which now have Native American rugs displayed from the beams.

The tower rises by spiral galleries enabling the visitor to look down as well as up to the top, similar to a wide, gaping staircase and is dotted with colorful, expressive murals that dominate the walls all the way up the inside of the tower.

"This is all Fred Kapotie, telling the story of the Hopi creationism, pretty neat stuff," Karpinski said. "Mary Colter was enamored with Fred, and with everything Native American and the southwest."

The bottom floor of the tower now contains a gift shop while the upper floors work as an observation deck, where visitors can taken in the spectacular eastern portion of the Grand Canyon.

"Colter was always being 'called away' in the middle of a big project," Karpinski recounted. "While she was gone from this one, the foreman, I guess to impress her or in an effort to get the job done, kept working and when she got back, he said 'look what I did.' Well, she told him to take it all down. And that is when they may have gotten the idea to call her Old Lady Colter."

Like her other visions she constructed at the Grand Canyon, Colter's ultimate goal was to give visitors the feeling that the building they are stepping into has been used or modified over the years.

"Even today, I'll have people coming into the store saying 'they really don't know who built that right?'" Karpinski said smiling. "I'll say 'we have films of people building it,' but you know, people don't know. If you allow them to see this as mysterious, and certainly that is what she wanted, they will and they will run with it."

The spot on which the building was constructed also has significance. By now, the Fred Harvey transportation company was a "big deal." Dubbed the Fred Harvey Indian Detours, tours went all over the Four Corners region, and understandably by the time people arrived at Desert View they needed to take a break and maybe pick up some trinkets. Much like the idea behind Hermit's Rest, another Colter construction, around 40 miles away.

Like Phantom Ranch, which opened in June of 1922 but the grand opening was delayed until three months later, the Watchtower officially opened in 1932, but no celebration was scheduled until May 13, 1933.

"And I would like to think it was because the old lady was like, 'I'm not going down there in this heat!'" Karpinski said.

But when it did happen, the event was one to remember. Everyone who was anyone was in attendance, including Fred Harvey and Santa Fe executives, tribal representatives, dancers and prayers, followed by a lavish barbecue that was free to everyone.

"It was quite a day," Karpinski said. "I hate to sound like I remember it, and I don't, but I'm sure in my old age I will think I was there."