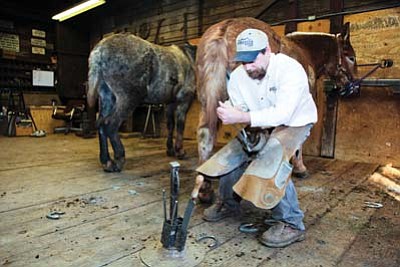 Ryan Williams/WGCN<br> Charles Berrong lifts the back leg of Nugget, a pack mule at Grand Canyon, onto his thighs before begining the shoeing process. Berrong sees a chiropractor once a month in order to counter the physically demanding work.

Shoeing the mules at the Canyon is a full-time, very physical job.

Berrong, originally from northern Alabama, said his career as a ferrier began after the ferrier he used for years on his own horses retired. He called several people out to work on his horses but it wasn't easy to find reliable help.

"They would either show up or not show up," he said. "Or, they would cuss in front of my wife and kids. I do not allow that. I don't think you talk that way in front of a woman or children."

Berrong decided to go to school to learn the art of shoeing himself with the intention to take care of his own horses. After working at a mill for 10 years, Berrong said he "got mad" one night and quit.

"I thought my wife would kill me," he said.

Despite the abrupt career change, Berrong gradually began picking up customers, eventually landing at the Grand Canyon in 2009 after visiting with his family on From Page 1B

vacation. Casey Murph managed the Livery Barn at that time. Berrong spoke to Murph about the job and eventually accepted the position.

"I stayed out here until it snowed," he said. "It was a big snow and I had never seen anything like that in my life. It was about hip deep. My wife was expecting at that time so I turned my notice in and we left."

After the birth of his baby back in Alabama, Berrong was again offered the position at Grand Canyon. He made his way back to the Canyon, working two years before his wife Lisa and five kids returned. The family initially lived in Williams before moving into housing at the Grand Canyon.

"I love working on the mules," Berrong said. "They're a lot of fun to shoe. Some of them are pretty good and some of them are not as good as others."

Berrong shoes between four and six mules per day depending on how the animals behave. It can take up to an hour to finish shoeing one animal. He sees each mule once every six to eight weeks. When a mule decides to be uncooperative, Berrong puts the animal in the shoeing stocks in order to get the job done with saddle maker Joe Marshall stepping in to lend a hand.

"He's left handed and I'm right handed so he does one side and I'll do the left side," Berrong said, "It makes it go a lot quicker and keeps them from acting up near as bad."

In order to train any equine animals to be shoed regularly, it is necessary to begin handling their feet early on.

"You start when they're little because when they get a thousand pounds or better, it's hard to wrestle them around and get them used to being shod," Berrong said.

Shoeing mules can be dangerous business. Since taking the position at the Canyon, Berrong has been kicked three times, only once intentionally.

You've got to watch out for even the "good" mules to avoid injury, though. Berrong said it's good to trust the animals but a healthy dose of respect is required as well. Mules in the pens at Grand Canyon and elsewhere communicate by biting and kicking each other.

According to Berrong, a biting and kicking mule is often physically uncomfortable. A chiropractor makes a regular appearance at the Livery Barn for just this reason. After an adjustment, difficult mules often calm down.

"The guy, he twists and pokes and pops them back in and the mules that were really hard to do, they're not the best to shoe, but they're not as bad anymore," Berrong said. "It does change them. Just like me and you, if we're hurting, we're going to be a little ill. Not real pleasant to be around."

Berrong said he's learned to adjust a mule's hip back into place. He even adjusts the hyoid bone connected to the back of the tongue.

"If it gets out of adjustment to one side or the other, it will make them toss their head," Berrong said. "They won't eat right. You can pop that thing back in and it really changes their disposition a lot."

It's not just the mules that need occasional adjustments, though. The job is hard on the lower back and legs. Berrong sees a chiropractor almost every month. He takes Tylenol and ibuprofen on a regular basis. Avoiding alcohol helps as well.

Despite difference in hoof shape, Berrong uses horseshoes as opposed to mule shoes at the shoeing barn, straightening out the quarters to fit the shoes to the mules. He said the wider horseshoe protects the mule better in the Canyon.

Is it more difficult to shoe a mule? Mules might have been given a bad rap. Berrong said the phrase "stubborn as a mule" easily applies to horses as well.

Now in his 11th year of shoeing, Berrong said he feels good and enjoys the work.

"If you're going to have a job, you might as well do something you really like doing or you'll be miserable," he said. "I really like shoeing. I couldn't work in an office."