Grand Canyon Railway's steam returns to the rails May 12-13, June 9
Trains depart from Williams depot on the hour 10 a.m.-4 p.m. 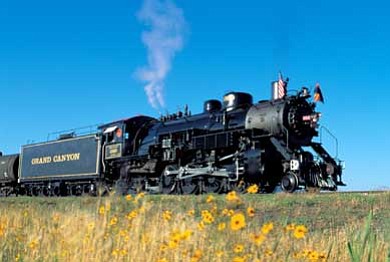 The “Cataract Creek Rambler” (right) will operate May 12 -13 and June 9 and tickets will be sold on-site for unreserved seating and will cost $15 for adults and $10 for children 15 and under. Steam excursions for the Railway’s regular 65-mile journey from Williams to the Grand Canyon will coincide with various celebratory dates in 2012.

WILLIAMS, Ariz. - Grand Canyon Railway (GCR) has announced the 2012 dates for special runs of its steam-powered "Cataract Creek Rambler" as well as other steam runs between Williams, Ariz. and the South Rim of Grand Canyon National Park.

The Cataract Creek Rambler is an eight-mile trip operating May 12-13 and June 9. Powered by steam locomotive 4960, GCR operates a single class of service in the train's historic 1923 Harriman cars. Trains depart on the hour from 10 a.m. to 4 p.m. Tickets for the "Cataract Creek Rambler" will be sold on-site for unreserved seating and will cost $15 for adults and $10 for children 15 and under.

Steam excursions for the Railway's regular 65-mile journey from Williams, Ariz. to the South Rim of Grand Canyon National Park and back to the Williams Depot will coincide with various celebratory dates in 2012. The April 22 run celebrates Earth Day; June 2 kicks off summer; July 4 is Independence Day; and Sept. 15 is GCR's anniversary.

The steam locomotive has been converted to use recycled vegetable oil for fuel, and reclaimed rain and snow melt - collected during the winter and northern Arizona's rainy season - are used in the boiler for steam. GCR estimates it uses 7,000 gallons of water per day when it operates the Cataract Creek Rambler and 11,000 gallons per round trip to the Grand Canyon. This is water that otherwise would be pulled from the aquifer.

"The train is great fun for all the family, but it is a trip on the steam engine train that really gets the train enthusiasts excited," said Bob Baker, general manager of train operations. "We are proud to continue the heritage of running the magnificent steam engines to the Grand Canyon."

Grand Canyon Railway has two operable steam locomotives that have been restored to like-new working condition. Locomotive No. 4960 was built in 1923 by Baldwin Locomotive Works in Philadelphia. It operated a freight- and coal-hauling service for theMidwestern Chicago, Burlington & Quincy (CB&Q) Railroad until the late 1950s and made its first official run on the Grand Canyon line in 1996.

Grand Canyon Railway is an authorized concessioner of the National Park Service and the U.S. Forest Service. For more information, visit thetrain.com or call 1-800-THE-TRAIN (1-800-843-8724).