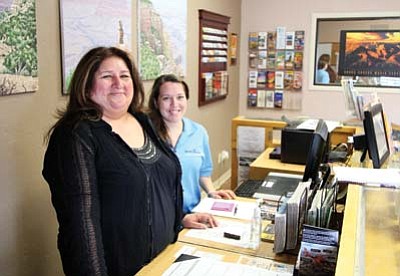 "It will be right out in front of us," she said. "It actually will be right on the roadway and say 'Arizona Official Visitors Information.' So that's going to be really great for us as a chamber, great for our membership. That means there will be that many more people coming in our doors. It's good for business. It's huge."

As an ADT office, Bustillos said the Chamber can begin promoting everything the state of Arizona has to offer visitors.

"We know they're coming to the crown jewel but we want to make sure that they're spending their dollars all through the state of Arizona," Bustillos said.

Bustillos said the ADT has not had a new applicant in years as there are offices throughout the state but, as a new town, it made perfect sense to open a new office in Tusayan. It took about three months to compile the necessary maps and photographs and upgrade the Chamber office to ADT requirements including outside visitor information.

"We have to have outside information for the visitor even when that door is locked," Bustillos said.

The office must now be open 40 hours per week, even during the off-season, something the Chamber had to carefully budget for as a non-profit.

Once the application and paperwork was in, Bustillos said the ADT called within a week to welcome the Chamber as the newest office.

"We didn't think it was going to happen that fast," Bustillos said.

Bustillos said there will be four mixers this year as opposed to every month.

"I always try to make our mixers really fun," she said. "You can't have them every month."

The first mixer of the year will be held at the Wild West Experience in May. Jeep tours and Safaris along with RP's Stage stop will host June's mixer followed by a less formal mixer centered around Fourth of July celebrations. The host for an August mixer has yet to be determined. Xanterra plans to host the final mixer of the year in September.

Tusayan's Fourth of July celebration will be back this year along with October's Rocktober Fest event featuring beer and food pairings and live music.

Bustillos said plans are in the works to host a Marine Corps Ball in Tusayan this year as well.

"Phoenix is really interested. I believe Flagstaff is," she said. "So, we could get around 100-150 veterans, maybe more."

The Chamber has invited a special guest of honor to be announced once confirmed. Bustillos said the Ball will be an exciting addition to events hosted in Tusayan.

"It's going to be a pretty big deal." Bustillos said.

Work is already under way to plan the kick-off event for 2013 - a wine and food-pairing event. - in collaboration with Xanterra.

For more information on the Chamber, visit