Williams Friends of the Williams Aquatic Center seeks board members 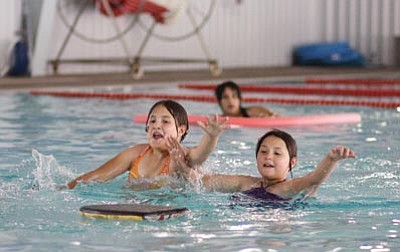 Ryan Williams/WGCN<br> Children enjoy the cool of the pool at the Williams Aquatic Center.

WILLIAMS, Ariz. - The Friends of the Aquatic Center (FWAC) are seeking members of the community to serve on the non-profit organization's board of directors. Two Director positions will be filled, followed by the election of the officers.

In 2011, thanks in part to a grant received from the Greater Williams Community Fund, and the city of Williams, the FWAC sponsored an extension of the pool season for an additional four weeks. This extension allowed students from the Williams Unified School District (high school and middle school) and Heritage Elementary Charter School to use the pool during their physical education classes, as well as providing the public with additional swim time. The extension provided addition revenue to the city of Williams.

The group's fundraising goal for 2012 is geared toward resolving the climate control issues in the pool area and giving the city the capability of returning the Aquatic Center to year-round operation.

FWAC board members are elected to two-year terms, and will need to attend meetings approximately every other month to help plan fundraising events, help apply for grants, and other projects that relate to the Aquatic Center and its potential return to year-round operation. The FWAC seeks members of the community who are passionate about swimming and the need for the Aquatic Center to re-open to year-round operation to give the citizens of Williams and the surrounding areas a place to exercise, participate in physical therapy, aerobics, and physical education for our youth.

Anyone interested in helping the FWAC should attend their next meeting at 6:30 p.m. on March 19 at the Williams Recreation Center where the appointment of new board members and the election of officers will occur. For more information contact Mike Dulay at friends@williamsaquaticcenter.org or call at (928) 235-5321.

All FWAC meetings are open to the public.