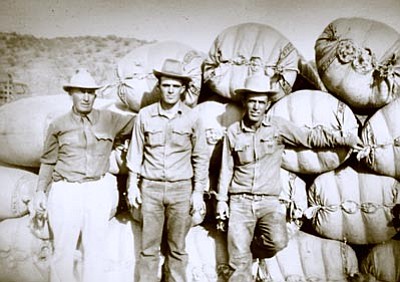 Photo/Pouquette Family Collection<br> After a long day of work, Joe, Albert and Pierre Pouquette stand in front of multiple bags of wool.

WILLIAMS, Ariz. - "When I was a little boy, I used to run out and get into Papa's truck so he wouldn't go to the camps without me. Sometimes at night when the headlights would go out in the truck, Papa would give me a flashlight and I would ride on the hood and 'shine' the way for him. I remember driving when I was about 9 or 10. I could barely see out the windshield and reach for the gas pedal at the same time. My left arm would be hugging the door and I would try to be nonchalant about the whole thing. I would be driving Papa to the camps where he spent many hours talking and joking with the sheepherders and cooks. Then we would drive over every inch of land, checking water holes, fences and other camps and finally at dark, head for home."

So goes the reminiscing of my husband's early recollections of his dad.

Albert Pouquette and his brother Pierre were third generation sheep growers and Albert Jr. Is the fourth. Perhaps it goes back even farther. Grandfather Pierre Pouquette raise sheep in France, migrated to the United States where his son, Joe, was born. He was the second of eight children. When he was 2 or 3 the family went back to France, then at 15, young Joe came back to America. He worked for other growers until he bought his own sheep. When he was 27-years-old, he married his childhood sweetheart, Margarite Bordenaue, who had also migrated to San Francisco from France. This was the year 1900.

Joe and Margarite were married in 1915 and had a wedding that was as grand and beautiful and full of fun as only "old country" people know how to give. After all this pomp and circumstance, Joe brought his bride back to, of all places, Ash Fork, Ariz. Today Ash Fork is a dot of a place where a few hundred people call home. What must it have seemed like to this young woman from San Francisco almost 100 years ago? There he settled her and took off on a sheep trail that lasted over two months.

Three children were born to this union, Pierre, Marie and Albert. Papa, as he was always called, told us many of his experiences in the early days, but foolishly, we didn't write them down so I cannot give all of the accurate dates that would be of interest here.

In 1914 when Joe was 24-years-old, he and a herder named Bargo and his Uncle Minoutt, walked several hundred miles from Ash Fork, Ariz. to Panguitch, Utah to buy sheep. Three burros and two dogs completed this company of hardy souls. One can only admire them and appreciate the hardships they must have encountered during the many weeks it took them to get to Panguitch from Ash Fork and back trailing these sheep. When they came to the Colorado River, the sheep had to cross over on a ferry boat at a point called Lee's Ferry. Since only about 100 sheep could load at a time, and there were approximately 4,000 of them, his took at least 40 crossings! Not once did Papa make this trip, but twice.

Papa tells of a friend of his who was making this same trip, at a later time. Whether he was driving them too fast or if the weather was overly hot and the tanks dried up, I cannot say. The sheep smelled the water from the river and in their unchecked panic, they stampeded and were all drowned. Sheepmen are a special breed. They keep on keeping on.

He lived during the time of the range wars and was attacked several times by cowboys. During one of these times, being the hefty little Frenchman he was, he dragged one cowboy off his horse and fought him "feet first." In 1917, he went into the American Army and for a brief time, was back in his homeland of France, where he served as an interpreter. He was never to go back again.

Papa Joe was a proud sheepman. Sheepmen are a special breed of people. They are gentle because their sheep require it. They are fierce, because conditions are at most always adverse. They are rugged because they are outdoorsmen. They are businessmen, because sheep are their livelihood. They are good providers because their families and employees depend on them. Perhaps more than anything else they are fighters. They fight droughts, predators, bad feeding grounds, inflation, deflation, every kind of sickness and disease known to sheep.

Raising sheep is not a business that requires eight hours a day, five days a week. It requires all of one's time and thought if one is to be the kind of sheepman that goes on from one generation to another.

Papa was this kind of sheepman. It was his and Mama's desire that their boys go to college. They took Pierre twice to Arizona State University, only to have him waiting for them when they arrived home, or so it seemed. Albert was willing to give it a longer try, but was home after the first semester ready to work with sheep and marry.

During his early days until the time his sons came into the business, Papa had several partners, brands and company names. But since 1945, our name has been the Red Hill Sheep Company.

Pierre is 10 years older than his brother Albert, so he has known and lived many months on the sheep trails. There's much he tells about that, but by the time Albert came into the business in 1946, the sheep trails were a thing of the past for the Red Hill Sheep Company and the railroad became the important moving factor. Moving sheep from one part of the country to another involved walking them, sometimes for days, to the railroad station. There they were loaded into the cars with great care and unloaded, hopefully a day later, at their destination. From there they were walked again, sometimes for days, to waiting pastures.

Around 1970, the trains became a thing of the past for us. Now the great trucks came at your beck and call to load up from the very pastures where the sheep are, and hopefully unload them the same day into waiting green pastures.

Many changes have come in the past years since Albert became a sheepman. The burros, for one thing. They were our steeds when we were young. We prodded and prodded them to move at a faster gate, and fancied ourselves great horsemen. These wonderful animals moved the entire camp equipment every few days. It was an

Hanging on by a thread: Manterola, Auza and Pouquette families shape northern Arizona sheep industry
Obituary: Edith Lillie Pouquette
For her Papa
Unraveling the Kaibab’s sheep-ish past
Taking the lead: A Peruvian shepherd builds a new life in the pastures of Williams
Event Calendar