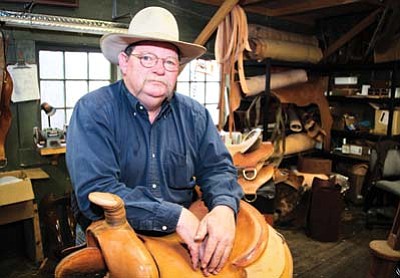 For many, the mention of the Grand Canyon brings one thing to mind. Mules. Mule trains carrying visitors to the Canyon down the Bright Angel Trail can be seen daily and supplies are transported to Phantom Ranch by pack mules just as often.

To keep the mule operation running requires a coordinated effort. While Max Johnson oversees the whole operation and Charles Berrong keeps the mules shoed, Joe Marshall works full time building saddles and repairing everything and anything made of leather.

Marshall grew up in the Valley but has called Cedar City, Utah home since 1979.

With the economy in Cedar City hitting a low mark in 2008, and his saddle shop barely hanging on, Marshall said when the previous saddle maker at Grand Canyon moved on, he applied for the job despite it's distance from his home and family.

"I was lucky enough to get it," he said. "I've done a lot of work over the years for different guys that have worked down here and my son was a packer down here and trail guide down here for a couple years," Marshall said. "I built a couple of saddles for guys that worked here or had come to work here."

Marshall started working leather when he was a kid.

"There was a saddle shop not far from where I grew up and I'd go hang out at the saddle shop until they would run me off," he said.

He started off carving leather to make belts and small tack items working at several shops doing repair work until he began doing the work on his own. He eventually built a tack room behind his house next to his corrals. He soon realized he would need to expand.

"I walked out one day and all my saddles were outside under a tarp because I had a shop full of repairs that I was doing," he said. "I sold the shop. It looked like a great big four-holer going down the road. I'd built it on pylons so we just jacked it up. We built one about three times as big and started working out of that."

Marshall said he loves working with his hands. Along with saddles, he has spent time as a cabinetmaker and carpenter.

"Most people that get into leather work here in the west, that's the ultimate dream

is to build their own saddle," Marshall said. "I've built seven for myself and don't even ride one. I've sold every one that I've built for myself."

For Marshall, it takes two to three weeks to build a saddle from start to finish - if that was the only thing he was doing. But, that's not the case. When it comes to keeping wranglers and their mules outfitted at Grand Canyon, Marshall is a one-man show. Anything made of leather at the Livery eventually makes it into Marshall's shop.

He builds the britchens and bridals, takes care of and repairs all the pack equipment, builds pack saddles, repairs all the saddles for the mule trains that carry visitors to the Canyon up and down the trails and builds muzzles.

"If it's made out of leather, it gets done right here," Marshall said. "I love what I do, this gives me an opportunity to apply my craft, my trade."

Marshall currently has nine saddles to build for the company. Until recently, the Livery used horse saddles on all the mules but that has changed. Marshall now builds new saddles with a mule "tree" as the saddle foundation. The mule trees are built much more flat with far less rock from front to back.

The trees are all the same style with a modified Association front end, four-inch cantle, 16-inch seats and 1 ½ inch dish.

Marshall said there are really only about five different backs among all 124 mules at the Canyon. The horse saddles still work on some of the smaller mules but the larger mule saddles now accommodate larger animals.

"These mules are what make my living," Marshal said. "I want to do everything I can to keep the mules comfortable."

As far as Marshall is concerned, the comfort of the animal starts with Charles Berrong, the Livery's Farrier.

"He sets those feet up," he said. "He balances the mule. This the way he's going to travel. All that goes right out the window if I build a saddle that doesn't fit that mule. Or, I build a saddle where my riggings aren't correct. What that does is changes the way the animal walks."

Change the way an animal walks and they get sore. And unhappy. Once the right saddle is matched with the right animal, Marshall said it's up to the trail guides to adjust the stirrups to each rider.

What's more, if a saddle is uncomfortable to the rider, the rider will likely shift around in the saddle, the weight distribution changes and the mule begins to walk differently.

"Everything has to come together," Marshall said. "A good mule is a happy mule. All these animals are athletes. If you get something on there that is going to restrict his movements, you're not getting the full potential out of him."

Marshall uses saddles trees built by Randy Alexander with Timberline Saddle Tree in Utah to build his saddles on. The trees are fabricated from a combination of metal bars and horns, a wood frame and laminated hard woods.

When he sets about putting a saddle together for trail riding at the Canyon, with it's inherent ups and downs, Marshall includes a slight rise into the front of the saddle.

Marshall said the seat of the saddle is cut from the best leather on hand, likely from the butt area of the hide with its tight grain and durability. Stirrups come from leather from the back.

How long will Marshall build saddles at the Canyon? It's hard to say. He said he loves his job and what he does but he misses his wife and family still in Utah.

"In the three and a half years that I've been down here there haven't been many days that I've felt like I've been working because I enjoy so much what I do," Marshall said.