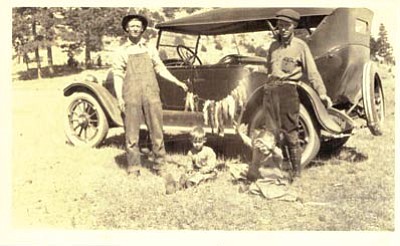 WILLIAMS, Ariz. - Robert Phineas ("Bob") (from Somerton, Ga.) and Bess Thurston (from Russell Springs, Kan.) were married in 1915 in Tucson. They met while Bess was teaching at the Empire Ranch (cattle ranch) and Bob was working on the railroad.

They came to Williams in the 1920s, with their two small children, Roberta (born Jan. 13, 1917) and Leland ("Bill") (born in 1918). They had several businesses in Williams. They ran the West End Garage, built the Thurston Motel (where the Grand Canyon Bed and Breakfast now sits), owned a car dealership and also the Thurston service station. They also built the motel that is now the Arizona 9 Motor Hotel (which sits to the west of the Sultana Theater), and lived in a house behind the Sultana while they were building the cottages.

Bob was mayor of Williams during the late 1920s. According to a family story, he was "framed" for bootlegging, having purchased a bottle of whiskey from two undercover federal agents. He spent 6 months in the Prescott jail for his crime. He continued to manage the city during his incarceration, having payroll brought to him by city employees and signing the checks from the jail. He was also re-elected while he was in jail.

About the time Roberta graduated from Williams High School (1935), Bess and Bob purchased land near the South Rim of the Canyon, built a home and began a cattle ranch there. They developed much of what is now Tusayan, including building the Red Feather Lodge and provided the federal government with property to build the first airport at the Canyon.

In 1951, perhaps one of the most important business decisions in Tusayan's history took place. The state wanted to improve Highway 64 because of the increasing number of tourists heading up to the Canyon. Bob offered to sell the state a right-of-way for $1 if they would realign the highway to run north through the middle of his property.

Bob's offer was accepted and in 1953-1954, the new highway was built where it is today. As Bob knew, highway frontage would be important for Tusayan's development.

Roberta's brother Bill, settled his family in Tusayan and his children and grandchildren are still living there, in fact still participating in running the Red Feather Lodge and other properties there.

Roberta married J.C. Fain in 1944. They had five children: Pamela, Rise, Robert ("Bo"), Theodore (Ted) and Louis. After being discharged from the Army Air Corps following the end of World War II, JC, who was a graduate of Northern Arizona University, taught sixth grade in Williams from the 1950s until the late 1970s. Roberta stayed busy raising the children, participating in the local women's bridge club and various other social groups.

It is quite unusual to have that many generations of native Arizonans all living in the same town. The entire family feels deeply connected to the Williams-Grand Canyon area and is proud to be part of its history, and in shaping its future.