DPS officer injured in collision on I-40 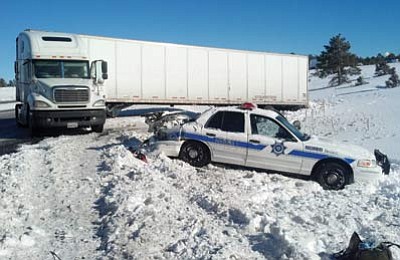 An Arizona Department of Public Safety (DPS) patrol car sits damaged on the side of I-40 near milepost 160 after a semi tractor-trailer rig lost control and hit the vehicle injuring officer Greg King. Submitted photo

WILLIAMS, Ariz. - An Arizona Department of Public Safety (DPS) officer is in stable but serious condition after he was involved in an accident Dec. 19 while directing traffic on Interstate 40 (I-40) near Williams.

The officer, Greg King, was directing traffic at about 9:09 a.m. after an earlier collision on eastbound Interstate 40 near milepost 160. A semi tractor-trailer rig that could not slow down hit King's patrol car, and the patrol car then hit King, according to DPS spokesman Bart Graves.

"We believe the highway was icy and slippery at the time," Graves said, adding that they are investigating the incident.

King sustained head injuries and a number of broken bones. He was flown to Flagstaff Medical Center, Graves said.

Graves said he hopes King has a speedy recovery.

"Being a highway patrol officer is a dangerous work," he said. "This shows what we deal with on a regular basis."