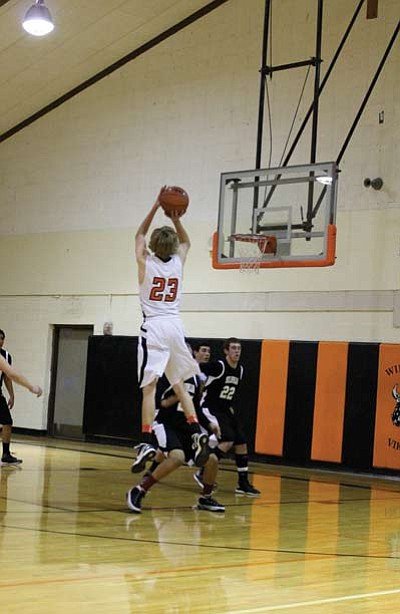 Senior Jeff Brownlee rises up for a jumper against Seligman Dec. 10. The Vikings defeated Seligman to remain undefeated at home during the regular season. David Yankus/WGCN

After a long weekend in Page, where the Vikings lost three tournament games, the team regrouped to play good team ball and score a lot of points against Seligman, said Williams head basketball coach Red McFerren.

"We played better team ball and played well defensively," McFerren said. "Colton Grantham, Joaquin Salaz, and Jeff Brownlee all scored in double figures. Almost everybody got in the scorebook, which is what you want to see, that balance offensively."

The Vikings jumped out to an early lead against Seligman, leading 35-28 at halftime. They were able to maintain a steady lead of close to double digits most of the second half. Seligman would challenge the Vikings though, coming to within one possession of the lead a couple times in the third and fourth quarters.

Williams was able to fend off the spurts by Seligman though, never giving up the lead and holding on for the seven-point victory.

Traveling to Grand Canyon the following night to take on the Phantoms would result in a very different outcome for the Vikings.

"Grand Canyon has a very good team, Joey [Bankston] slammed on us three times and bent the rim once," said McFerren. "It's a breakaway rim, so they had to stop the game to pop it back in place."

McFerren said his team had a rough second half, and overall it was one of those games he would rather forget. The shots were just not falling for the Vikings, whereas the Phantoms started out hot and continued to dominate throughout the evening.

McFerren even admitted to sitting down in the second half, something he rarely does.

"We couldn't make a shot to save our life, and they were hitting everything. No matter what we did, they were able to be successful that night," McFerren said. "They were hitting their outside shots so we went from zone to man-to-man, we tried a box and one defense, we fronted the big man, but they just kept hitting their shots and were still able to get easy buckets on us."

The Vikings next game is Thursday at home against the Winslow Bulldogs (8-4) at 7 p.m. Winslow eked out a narrow 63-59 victory in their first matchup against Williams earlier this season.

During that Nov. 20 game, Winslow had a big lead in the second half only to see the Vikings come storming back to take a one-point lead with 47 seconds left in the game. Then a controversial 6-point possession by Winslow sealed the win for the Bulldogs. The possession included two technical fouls called on Williams.

"We owe them one, we thought we had that game in Winslow earlier this year," said McFerren. "We shut them down pretty good in the second half with our 3-2 zone, and that's when we made our comeback. We'll probably do something like that again, or a match-up zone because they are a good shooting team. If you let them have the open jumper, they're going to make them. They are a very good team, it will be a tough win."

After the Winslow game, the Vikings have a two-week winter break before their next game at Ash Fork on Jan. 7, which will be the first of three games played by Williams in five days.

McFerren stressed the importance of using those two weeks to get prepared for the second half of the season, as well as using that time to heal or stay healthy. McFerren said he expects senior Alessandro Fadda to return in time for the Ash Fork game, which will give the team a much-needed boost in scoring and hustle plays. Fadda suffered a severe ankle injury in November.

"He's [Fadda] a good ball handler and a good shooter, he can help slow the game down for us too if we're running out of control," McFerren said. "We're really starting to come together as a team, we have some newcomers to varsity basketball this year, but I feel we're starting to gel as a cohesive unit, really starting to bond."

The Williams Lady Vikes also lost to Grand Canyon on Dec. 11 by a score of 34-26. The Lady Phantoms held off the Lady Vikes despite a valiant effort by the Williams girls varsity basketball team. The Lady Vikes dropped to 0-5 for the season, not including tournament play.