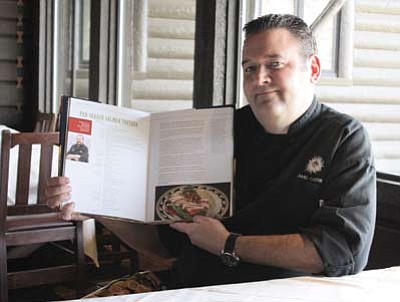 GRAND CANYON, Ariz. - Matt McTigue knows a thing or two about designing menus and dishes, and recently the El Tovar's executive chef was acknowledged for his efforts in "100 Years 100 Chefs 100 Recipes" cookbook, as well as on PBS.

The cookbook, published to celebrate Arizona's centennial year, features 100 restaurants and chefs throughout the state.

To promote the cookbook, PBS invited some of the chefs to its Phoenix studios to cook their featured recipe before a live studio audience. The show aired Nov. 27.

"It was nice, it was pretty heavy company to be in," McTigue said of the television experience. "It was a cool experience to witness this eight-hour process of filming it all and the condensing it down into an hour and a half show."

During his segment, McTigue prepared pan-seared salmon tostada, a dish present on El Tovar's menu for more than 15 years.

"It's one of those dishes that people come here and have and then they come back a year later for their anniversary and expect to see the same menu and the same dishes," he said. "Dishes like the French onion soup and the chili recipe were in place way before I got here. They still are and they always will be. It's kind of a comfort food thing."

A way of life

Born and raised in Long Island, N.Y., McTigue interned at the El Tovar restaurant while studying at the Culinary Institute of America. After graduating, he came back to work at the El Tovar with a friend and worked his way up.

Since then, McTigue has stayed busy creating countless meals for visitors and locals alike, with Thanksgiving consistently being the restaurant staff's busiest day. McTigue said typically, his staff serves around 1,600 meals between breakfast, lunch and dinner. During the peak season, McTigue oversees 1,200 meals per day. In the winter months, the number usually drops to half that.

"We've had people coming here for Thanksgiving for five, six, even eight years in a row," McTigue said. "We see them every year and look forward to it. They call in advance and say, 'what's the menu? What are we going to have?'"

The same goes for holidays like Christmas and New Year's. Because the restaurant is open all year, McTigue and his staff rarely see a day off.

"The last time I didn't work on Thanksgiving, Christmas or Easter was probably 1984," McTigue said. "I've been in the food and beverage industry since I was 14 years old and it's a way of life."

El Tovar's culinary staff has the opportunity to make menu changes once a year. After reviewing, The National Park Service approves the changes before the new menu items are served.

More information on ordering the cookbook is available by visiting www.100years100chefs100recipes.com.