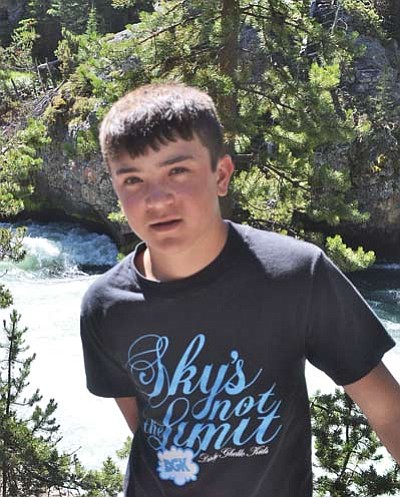 Tucker Matthew Leland Dodds, 13, of Williams, Ariz. went home to be with his Lord and Savior on December 4, 2012. He was greeted there by his Grandpa Larry and beloved Uncle Brian. Tucker was born May 26, 1999, in Flagstaff, Ariz., to Ken and Kim Dodds.

Tucker enjoyed life to its fullest. He had a great sense of humor, which will be missed. One of his greatest pleasures in life was hanging out with his older brother Tyler. The two of them were inseparable. They loved riding dirt bikes, shooting bows, hunting rabbits and playing catch together. Tucker loved hunting with his family and had been successful on all of his hunts. He loved being outdoors, playing with his three dogs and hanging out with friends. He was excited about attending Williams High School the next school year. Tucker played for the Williams Falcons football team this past fall and truly had a fantastic season. He was chosen by his team as the "Best Offensive Lineman."

Tucker's absence will be deeply felt by all of the friends, his cousins Astrid, Ella, Brennen, Evan, Lucia, Aubrey, John, Irene and Addison; his aunts and uncles Kara and Chris Hurst, San Diego, Calif, Erin Kennedy, Canby, Ore., Stephanie and Julian Ayer, Tacoma, Wash. and Sean Kennedy, Canby, Ore. and his grandparents Dr. Dan and Clorinda Dodds and Sonja Kennedy. Most of all, he will be dearly missed by his mom, dad and brother that he leaves behind.

Funeral services will be held December 8, 2012 at the First Baptist Church in Williams, 629 W. Grant Ave., at 3 p.m. Public viewing is at 2 p.m. In lieu of flowers, please make any donations to the Williams Falcons football team.

Condolences and memories may be shared with the family at www.norvelowensmortuary.com.

Arrangements are under the direction of Norvel Owens Mortuary.