Yellow house opens doors for SAVE-MTR fundraiser
Kerry-Lynn and John Moede will open their historic home to the public Dec. 15, original items found in the house will be on display 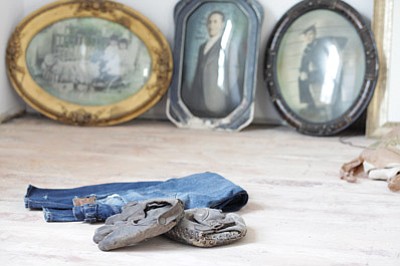 Several dogs in the Williams area need owners like this, and SAVE-Meant to Rescue (MTR) is working hard to find them.

The goal of the organization is to build a holding facility for dogs until they find "forever homes." SAVE-MTR hopes to raise money for the holding facility at a holiday fundraiser Dec. 15 at the Yellow House on the corner of W. Grant Ave. and S. Sixth St.

"It's in a sparkling, brand new, rejuvenated house that hasn't seen a Christmas in probably 50 years," said Robynn Eckel, who started the nonprofit about four years ago.

So far, SAVE-MTR has raised about $70,000 of the $120,000 they need for the holding facility. The city donated land behind the rodeo grounds for the building.

"Our biggest hurdle is getting money for building materials," Eckel said, adding that much of the labor will be donated. The group also needs an architect to look over the plans for the building.

Eckel believes the holding facility will fill up quick, so SAVE-MTR will need to educate the public so it doesn't reach capacity. Having a pet is a commitment for life and owners can't abandon them if they move, she said. Eckel also stressed the importance of spaying and neutering pets.

"Every abandoned dog on the streets anywhere, they're just all a really ignorant human's mistake," Eckel said. "These dogs have done nothing wrong."

Eckel said after they have been abandoned for so long, some dogs may become sad or angry. But after she works with the dogs for a while, their tails start wagging again.

"If somebody will take an interest in them they're darn worth having," she said.

Eckel said the dogs and the Yellow House where the fundraiser will take place have more in common than people might think. Both were abandoned by their former owners.

"If we can save an old house and make it happy again, we ought to be able to save these dogs and make them happy again," Eckel said.

Kerry-Lynn and John Moede will open their house to the public for the fundraiser. They purchased the historic Yellow House in April. The Negrette family owned the home from 1919 until the Moedes bought it.

The Moedes are in the process of renovating the house and hope to be done in April.

"We're trying to save the history but still make it livable for current times and current weather," Kerry-Lynn said.

The Moedes have salvaged some of the original windows from the house for a china hutch and the wood from a barn for a dining room table and kitchen island.

"Even though we had to tear down the barn it's still here," Kerry-Lynn said.

During the fundraising event, people will be able to see the house and several of the original items Kerry-Lynn found there.

"You think all the old stuff's already been found but then you find new stuff," Kerry-Lynn said.

Some of the items include a pair of Levi's 501 jeans and two dresses from the 1920s, old baseball gloves, photographs of the family and letters they wrote.

One of Kerry-Lynn's favorite finds is a parasol from 1899 that she later saw in a Negrette family photo.

She hopes people who want to see the house will come to the fundraiser to support SAVE-MTR.

The SAVE-MTR fundraiser is Dec. 15 at the Yellow House. The evening will include wine and craft beers, hors d'oeuvres and live music. Organizers ask guests to bring a bottle of wine or a six-pack of craft beer. They will auction off the remaining wine and beer at the end of the night and all proceeds will go to the SAVE-MTR holding facility. Tickets are $30 per person and are available by calling (928) 635-1571.

SAVE-MTR is also selling calendars featuring some of the rescued dogs from the past year and their success stories. Those interested in purchasing calendars may call (928) 635-4726.