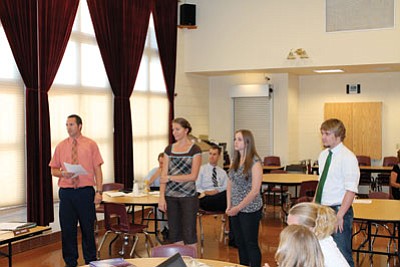 WILLIAMS, Ariz. - New teachers at the high school and elementary school levels were introduced to the Williams Unified School District's (WUSD) Governing Board on Aug. 8 during a regular meeting.

Evans has been in the district in various positions involving Reading First, Aims Testing Data Coordinator, and substituting. She is retired from government service as an administrative specialist from the Kaibab National Forest and U.S. Geological Survey. Following the footsteps of her grandmother, a 1919 WHS and 1921 Tempe Normal Teacher's College (now Arizona State University) graduate, and her sister, first-grade teacher Julie Grantham, she received her K-12 CTE Business Administration Teaching Certificate in March 2010.

Her daughter Kristen is an Aesthetician in New York City and son Brandon is a PGA golf professional in Phoenix. She is excited to bring the state's mission to her classes ensuring a dynamic workforce by fully developing every student's career and academic potential and preparing WHS students for workforce success and continuous learning.

McFerren's wife Lisa also works for the Williams School District and they have two children, a 21-year-old son in the Navy and a 19-year-old daughter attending college in Kansas. He said how excited he was to move back to Arizona and begin working for WUSD.

Lisa Hogan, the third newcomer to WHS, is a graduate of Purdue and formerly taught at Mingus Mountain Academy for emotionally and behaviorally at-risk adolescent girls. Hogan is also in the National Guard.

Kansas native Amber Kunselman will be the Accelerated Reader Coordinator and Resource Intervention Teacher for WEMS. Kunselman moved to Arizona in 2006 and graduated from NAU in 2010. She worked in Seligman teaching middle school math and language arts for two years before being hired at WUSD.

Kunselman and her husband Patrick Hageman are active members of SAVE Meant to Rescue and have a few rescue animals of their own. Working for WUSD has been her self-described goal and dream since she graduated college and bought a home in Williams in January 2011.

Lauren Likovich will be the middle school Math Intervention Teacher for WEMS and coach to the cheer team. Likovich was born in Flagstaff but spent most of her life living in Gilbert, Ariz. During her years in Gilbert, she was extremely involved in school cheerleading as well as competitive cheerleading for Arizona Power Elite. She is very excited to start coaching the cheer team as that is truly a passion of hers that has been dearly missed.

Likovich attended NAU where she received a degree in Elementary Education with a minor in Psychology. Previously, she worked at Killip Elementary School in Flagstaff as the third-fifth grade Special Education Paraprofessional. She helped accommodate students with small group instruction for math, reading, and writing. She also taught the after school Math Intervention program, STARS.

Likovich said she feels extremely honored to receive this opportunity and cannot wait to get to know all her new students and the rest of the Williams community. In her spare time she enjoys reading, hiking, and spending time with family and friends.

Originally from Phoenix, Daniel Nelson attended Mountain Pointe High School and went on to study at NAU, which is where he discovered his passion for teaching. Nelson, the recent college graduate, is now the new science teacher at WEMS. He has traveled to three different continents, and his experiences both at home and abroad have influenced his laid-back attitude and infectious sense of humor. When he isn't teaching, Nelson enjoys cooking, hiking, and watching hockey.

In other school board news, the WHS gymnasium and WEMS roof projects are complete but after further investigation the WEMS roof does need additional work. This extra work is not expected to impede on any school classes or activities and will be funded by a state grant.