Inspired by the silence of the Grand Canyon
Flutist, composer and poet Linda Chase to work with Grand Canyon School, GC Music Festival and more during residence at the South Rim 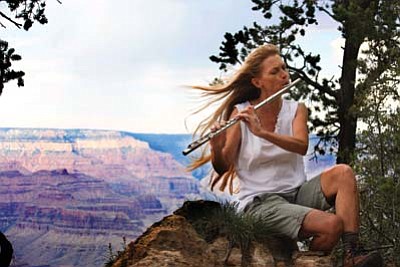 Chase lives in Arlington, Mass., where she teaches composition, writing, performance, harmony, arrangement, ensemble and liberal arts at Berklee College of Music, and interdisciplinary arts ensemble and private studio at New England Conservatory, both located in Boston. Linda received her BA from Evergreen State College in Olympia, Wash., her Artist's Diploma in Jazz Compositions from Berklee College of Music, and her Master of Music from New England Conservatory of Music, with an emphasis in contemporary improvisation. She has been a guest lecturer and instructor at the Boston area public schools, the Boston Center for Adult Education, Harvard University and the Grand Canyon Music Festival musicians that gives GCS students the opportunity to experience all aspects of band life.

Also on Aug. 31, as well as Sept. 1, will be performances by Catalyst Quartet with special guests Ethel and bassist Trevor Reed. This young string quartet, top laureates and alumni of the internationally acclaimed Sphinx Competition for young black and Latino string players, is on a mission to advance diversity in classical music and inspire new and young audiences with dynamic performances of repertoire by a wide range of composers. Their performance will feature Osvaldo Golijov's nonet Last Round, an homage to Piazzolla.

On Sept. 1, music lovers can enjoy composer Richard Einhorn's octet, "The Silence." Event planners are inviting all festival-goers to join them for a pre-concert discussion with Einhorn about his experience with sudden hearing loss at the age of 57, and how he has become an advocate for the hearing impaired.

Since 1984, the Festival has served Native American communities within the state, including the Navajo, Hopi, Havasupai, and Pima Indian Reservations, as well as the Heard Museum and Scottsdale Community College. In 2001 the festival inaugurated their Native American Composer Apprentice Project (NACAP).

Recognized for its outstanding work with youth, NACAP is an intensive tutoring program on the art of composition for string quartet. Their 2012 composers-in-residence Chacon, Begay, Reed, and Blair Quamahongnewa, work with students from five Navajo and Hopi high schools in Arizona, New Mexico, and Utah. Those student works are then work-shopped, premiered, toured, and recorded by ETHEL, NACAP 2012 ensemble-in-residence, and the Catalyst Quartet, 2012 NACAP fellowship ensemble-in-residence.

On Sept. 7, kicking off the third and final weekend of the festival, event-goers can enjoy "A Night at the Opera" when husband and wife singers Kirk Dougherty and Cabiria Jacobsen bring some of opera's greatest hits to the Grand Canyon Music Festival stage, including semi-staged scenes from La Cenerentola and West Side Story. Featuring the mezzo-soprano Jacobsen and tenor Dougherty, along with Jon Klibonoff on piano and Clare Hoffman on flute.

Then on closing night of the festival, Sept. 8, enjoy the "Art of Song" from Baroque masters to contemporary classics with Dougherty and Jacobsen plus Klibonoff on piano again. The husband and wife team will perform works of Purcell, Handel, Britten, Gershwin, and Porter, as well as selections from two new song cycles; Vignettes: Ellis Island by Alan Louis Smith and Craigslistlieder by Gabriel Kahane.

The Grand Canyon Music Festival, winner of the President's Council on the Arts and the Humanities Arts and Youth Program, Governor's Arts Award, and two-time winner of the ASCAP-Chamber Music America Award for Adventurous Programming, has been recognized as an innovator in programming and education outreach, with support from the National Endowment for the Arts (NEA), Western State Arts Federation (WESTAF), the Flinn Foundation, Chamber Music America, the Nina Mason Pulliam Charitable Trust, ASCAP Foundation, APS, and the Arizona Commission on the Arts.