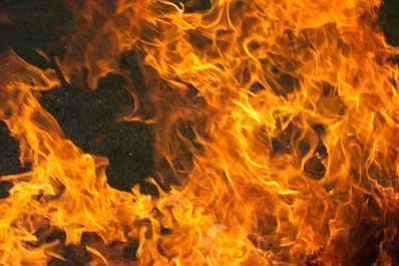 FREDONIA, Ariz. - The East Fire on the North Kaibab Ranger District of the Kaibab National Forest grew substantially yesterday due to shifting, gusty winds and the type of terrain and fuel in which it was burning.

The lightning-caused fire, which is located in a remote area on the far west side of the North Kaibab District, is close to 1,400 acres in size. Less growth is expected today due to less windy conditions and good relative humidity recovery overnight last night.

The fire, which was discovered late on Aug. 8, moved quickly through cheat grass and pinyon-juniper woodlands yesterday but is beginning to slow as it moves into rocky areas with less vegetation.

Firefighters made good progress yesterday on the north and east sides of the fire using a dozer and burnout operations. While no containment has yet been reported, it is expected that firefighters will continue to make progress today on suppressing the East Fire.

Resources on scene include five engines, one helicopter, one dozer, two 20-person hand crews, and multiple individual firefighting personnel. Additional resources are expected to arrive today. As of this morning, the fire is being managed by a Type 3 Incident Commander.

Additional information, including a map, is available on Inciweb at