Are you ready for some football?
Williams Vikings gearing up for a season of winning 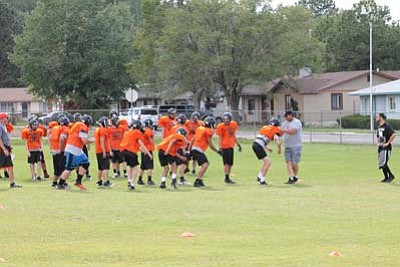 But this hard work Coach Brownlee speaks of pays off with team camaraderie, good sportsmanship, a high level of athleticism, discipline, self-confidence, and pride in your school and community. And with WHS football practice already under way, the team is looking to get a good head start going into next season.

Last year the Vikings finished the regular season with a record of 7-3, followed by a first-round playoff loss.

"We had some nice wins over Page and Sedona, which are all bigger schools than us," Brownlee said. "One of these years we're going to get by that first round [of the playoffs]. We just seem to get to that first round and either mentally we're not prepared or we have somebody injured. Two years ago we lost to Tempe Prep 20-13, so we can compete, but last year we just had a couple misfortunes and things didn't go our way."

Departing seniors from the offensive line makes this year's squad very young up front and that's where Brownlee feels they will be tested. Underclassmen will be a large part of this year's team with sophomores making up the largest percentage of players.

"Our line is young, and that is going to be the telltale story of this year is how our line can handle adversity and some big challenges," he said. "And we'll probably move some kids around who are used to playing a specialty position, we may put them on the line. If the team needs them on the line, then that's where they'll probably play. And they'll have to sacrifice playing a specialty position to help the team, but that's what we encourage. This isn't about an individual, this is about a team."

Brownlee said he is very excited about this upcoming season and feels they can compete with at least nine of the 10 teams on their schedule this year. River Valley High School is in a division higher than WHS and is the one team that causes concern for the coaching staff. They bring a very tough program to Williams this season but at least the Vikings get them at home.

Surrounding the offensive line are players at quarterback, halfback, wide receiver, fullback, and tight end that Brownlee feels are some of their strongest ever.

"This year we're very excited, at our skill positions we're as good as we've ever been," he said.

On the defensive side of the ball, Brownlee added their team speed is extremely good and he said he is very confident in their ability to read and react. He also mentioned their overall team speed is going to be very good and that will help them significantly this season and keep them in every game.

Brownlee encourages more kids to still come out for the team; he hopes to add another 10 players to the roster. They have until Aug. 15 to join the football team and add some much needed depth to the roster that the coaching staff needs.

Brownlee said he understands football is tough but hopes kids will make the commitment to a sport and stick with it all four years of high school. He said it's great for the program and the school to have a kid play, and it's great for the kid too because he can learn how to play on a team, learn how to sacrifice, develop leadership skills, maintain a healthy lifestyle, and win and lose with dignity.

In addition, Brownlee said he hopes the community will continue to support their team because the kids really want and need that support.

"We as coaches love when our community supports our team," he said. "And these kids would love for this community to support our team, and there is a lot of support. These kids play for their community, the community ought to support these kids while they're playing. In all sports too."

The Vikings have three full weeks of practice before their first scrimmage at St. John's on Aug. 18 at 6 p.m. Practices this year for all schools across Arizona are now once a day for three hours until school starts. Due to the heat exhaustion rule no more two-a-days or extended practices more than three hours daily are allowed.

"We're excited for this year, we have most of the coaching staff back so we're getting our program implemented and the kids are understanding the system better," said Brownlee. "We're ready to play."