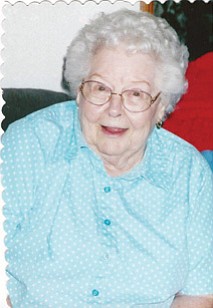 Dorothy Ellen Payne (Byars) passed away at her home Monday, April 16, 2012 surrounded by her family who all loved her very much. Dorothy's family (Thompsons and Purtymans) settled Indian Gardens in Oak Creek Canyon during the late 19th Century. Born on April 3, 1926, to Erma and Walter Baker, Dorothy lived in this area till she was in the second grade when her family moved to Williams, Ariz.

Dorothy grew up in Williams, which is where she met and married the love of her life, Jerry Payne. Dorothy and Jerry had four children - Tommy, Jerry, Brett, and Debbie.

During the mid-fifties Dorothy and Jerry bought and ran the historic El Pinado Hotel, which they owned approximately 10 years. In 1960 they also bought the Dairy Queen, which has been owned by the family for 52 years. Unexpectedly, in 1966 Jerry died tragically, leaving Dorothy with the two youngest children to raise (Brett, Debbie).

One of Dorothy's hobbies was bowling and she was on a league for 25 years. During this time she traveled to many places within the U.S. and abroad. Dorothy also cherished the time she spent with her dearest friends (whom she had known since childhood) Robby Smith, Mary Pitts, and Bonnie Perkins. For many years they could be found at Rosa's on Friday nights.

Although her life was filled with many unexpected tragedies, Dorothy possessed a zest for life and was always able to smile and laugh. =Indeed, Dorothy was strong, dignified, and brave till her final breath. Dorothy was preceded in death by her husband Jerry (1966), her eldest son Tommy (1977), her son Jerry (2003), and her grandson Michael (1991).

Graveside services will be 2 p.m. Saturday, April 21, 2012 at the Williams Cemetery. Condolences can be sent to www.norvelowensmortuary.com.